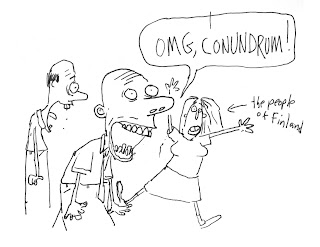 Hey Everyone, just got back from the Helsinki Comics Festival where Conundrum Press was a guest. It was a fantastic festival, good in terms of sales and also just a wonderful group of organizers and events and I spent the weekend hanging around with a bunch of great friends, new and old; Andy Brown, Howard Chackowicz, Philippe Girard, John Martz, Michael Deforge, Lilli Carré and Alexander Stewart, Bill Kartalopoulos and Julie Delporte. When Howard learned the Finnish word for thank you, he NEVER stopped using it, charming the hell outta the locals. 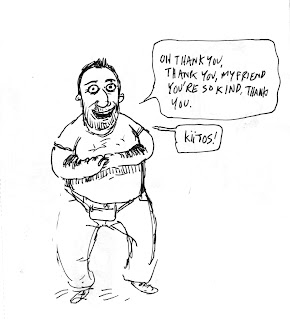 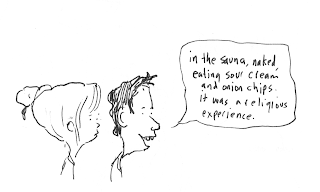 A quote from Alexander about the sauna, which we Conundrum guys missed. I'm okay missing out being naked with a bunch of other cartoonists (been there, done that…) but I am sad to have missed the sour cream and onion chips and beer.


Spoke with Ulli Lust again, her book, The Last Day of The Rest of Your Life is fantastic and should be read by everyone. I met Jooste Swarte and spoke briefly to him, then he bought a couple of Conundrum books. Filled up an entire sketchbook over the weekend keeping up with Martz and Deforge, who NEVER stop drawing. Kids, the secret to comics, as with everything, is always HARD WORK.

Here is the damage we did to the table cloth.


In that same bar, Howard Chackowicz–one of the best the best cartoonist travelling companions in the world– made friends with a seriously drunk Finn named Pikka, who was filled with a love for Howard that bordered on homicidal. “I come back and smash your face” is an actual quote, though he never returned. 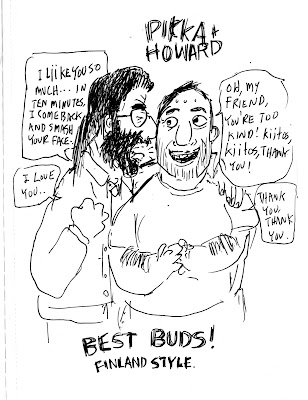 And here's a bunch of cartoonist's drawing good ol' Andy Brown. (Look out Annie Koyama, Andy's a close runner for the most beloved comics publisher though no one could hope to beat him in terms of hirsuteness.) Andy's giant, picture-filled report is  HERE! 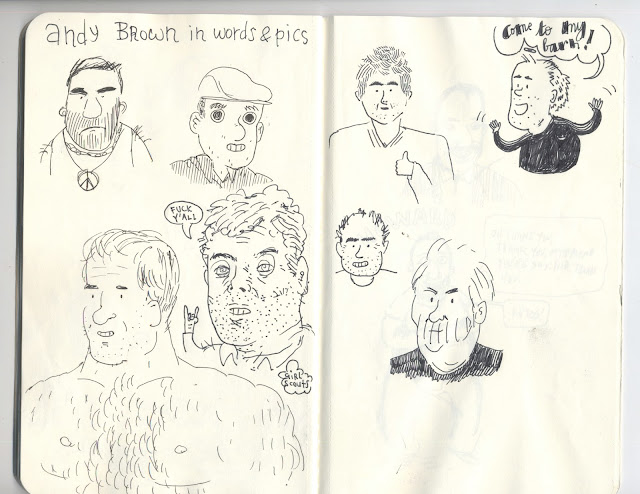 Thanks to The festival organizers, especially Otto, Maura and Kalle and all the volunteers, they all made us feel so welcome. This really was a wonderful festival, if you can attend next year, you should!
Okay, back to work.
Posted by ol' joe at 8:04 AM

wish i wuz there !

Me too! Looks like it was a great time.

I often get emotionally involved. Like when I read your post, I can cry, laugh, sad, funny, depending on your written words. I think you are a sensitive person.
www.facebookbaixargratis.com.br