So I was in NYC for COMICS ART BROOKLYN with old Andy Brown and the Conundrum Press retailing juggernaut. I got to see a lot of cartoonists I like and a lot of writers about cartoons that I like. I drank beer with some of them. and took pictures of NONE of them. I've done some fast, sub-pathtic doodles to illustrate missing pieces.

I do have SOME pictures though! They are blurry and random, but there's a couple of rare pleasures in there as you will no doubt see. CAB was a great show, very busy and well-organized. Gabe from Desert Island and his crew did a great job. From the stack of FREE Smoke Signal comics at the door, to the reasonably priced CAB T shirts (5 bucks!) and the free coffee for exhibitors, it was a real generous show, and like TCAF, it makes me so appreciate benevolent comic shop owners like Gabe and Peter and Chris at the Beguiling. These guys are like the medici's of the comics world.
I have no pictures of the venue, of course, but I was there a day early scoping out the locale and suddenly saw John Martz, standing in front of the church. I was waving and grinning and walking goofy till I got closer and saw it was just another guy with beard and glasses. I kept walking. I apologize to that bearded kid. sorry. 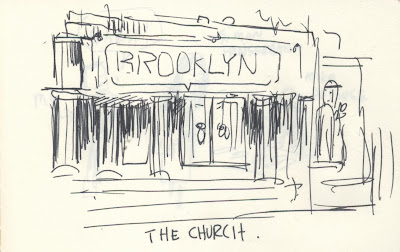 NYC pizza slices are some of the best in the world. I ate a couple, then went to Dash Shaw's animation screening. Some fun stuff there. These great limited animations illustrating inane tv shows which really show how insane Wheel of Fortune and Blind Date are, good stuff. Sat next to good old Tom Spurgeon. After the show, went out for beer with the Spurge, Paul Karasik, Mark Newgarden and James Sturm. Do I have pictures of this? No I do not. I was trying to pretend I was not starstruck hanging out with all of these guys who work I just love. A really nice time in a quiet bar, a few beers and talking comics shit with guys that really know their stuff. A really nice night. then midnight breakfast at an all night deli. 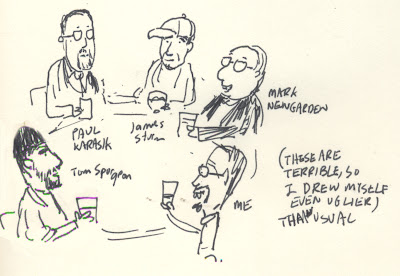 Saturday, meet up with old Andy Brown. He's launching two new books with the authors signing, Other Stories and the Horse You Rode in On, by Dakota McFadzean and Brooklyn Quesadillas, By Anthony Huchette. Two very nice and talented young cartoonists. This time I DO have a picture. Anthony sketching, Dakota selling. 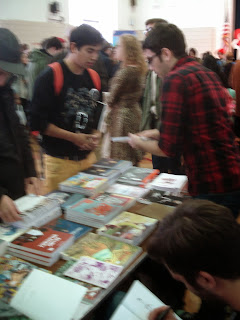 Below: BONUS, behind the crowd, the floating head of Tom Spurgeon, smiles on approvingly. 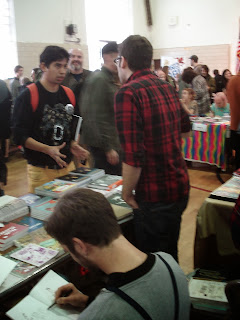 I really wanted to meet Simon Hanselmann and tell him how much I like his comics, but he looked too cool and I felt like a nervous old fanboy and didn't go say hi. 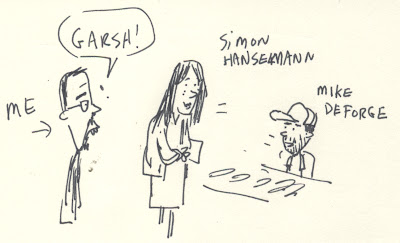 I had a new comic in a photocopied form, Shut Your Piehole, Johnny Pinetop, which I mostly forced on people I like. John Martz thought it was called: Close Your Gob, Little Woody or something, which may be a better title. 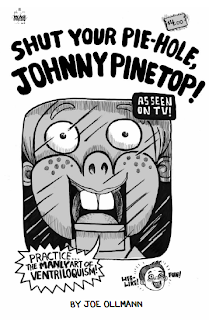 Highlight of the show for me was these two handsome dudes below, who both at separate times, inquired about who they should sue for me appropriating their image for the cover of my book Science Fiction. They were kind enough to pose for pictures with said book. They even had the red shirt. Amazing. Thanks guys! 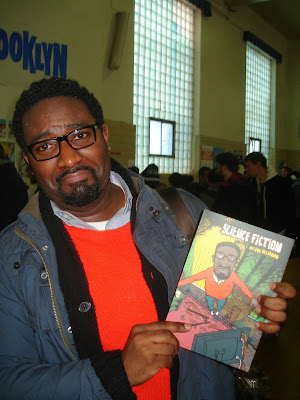 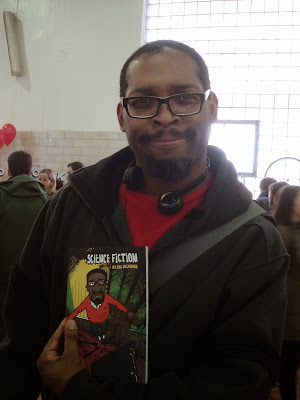 As Tom Devlin says, sitting isn't selling and we stood for 800 hours.
Dakota, at the Conundrum table, we fold our arms for photos! Get with it, son! Andy's got it going on as usual, showing good arm-crossing form. 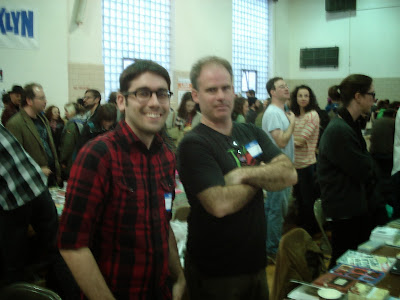 I thought the show was two days in my typical bungling, so I had to stay an extra day in NYC. wah wah. So I trucked out to Flushing Meadows to the site of the old World's Fair and the home of the Queens Art Museum, which my son Sam and I had just read about in the FANTASTIC book Wonderstruck, by Brian Selznick, (He of the movie Hugo fame (He wrote and illustrated the book Scorsese based the movie Hugo on. Again, a wonderful, amazing book you should read!). He describes a giant model of NYC, the largest architectural model in the world, that I assumed was fictional until I looked it up! So I promised Sam I'd take pictures. A really beautiful museum. The Panorama is unbelievable. BONUS, I was re-reading World's Fair, by E.L. Doctorow on this trip! (A great, sweet book that everyone should read.) 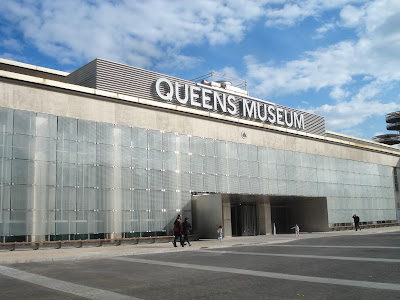 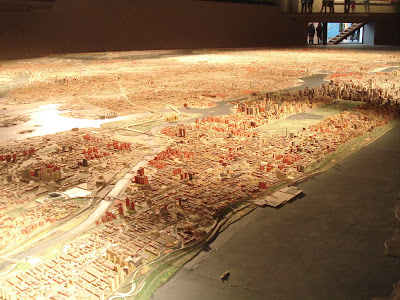 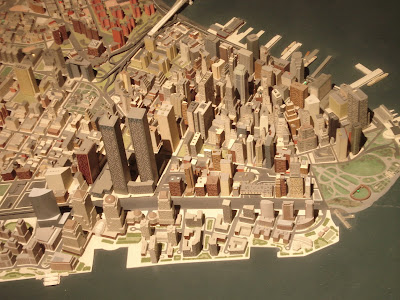 Hung out at the airport with John Martz who had missed his flight and was waiting anxiously on standby while I blathered away about me, me, me. He kept hearing names over the intercom that were almost his; Johan Moharz, Jonah Murharge… Later, like a good son, he texted me that he made a later flight.

I had a great time in Brooklyn, thanks to Gabe and everyone, great job on the festival.
Thanks to my brother Andy Brown, who it turns out snores even louder than I do! Good hanging out with Dakota and Anthony. Great seeing all the people I got to see. Inspiring to see so many cartoonists I like in one building.
That's a wrap!