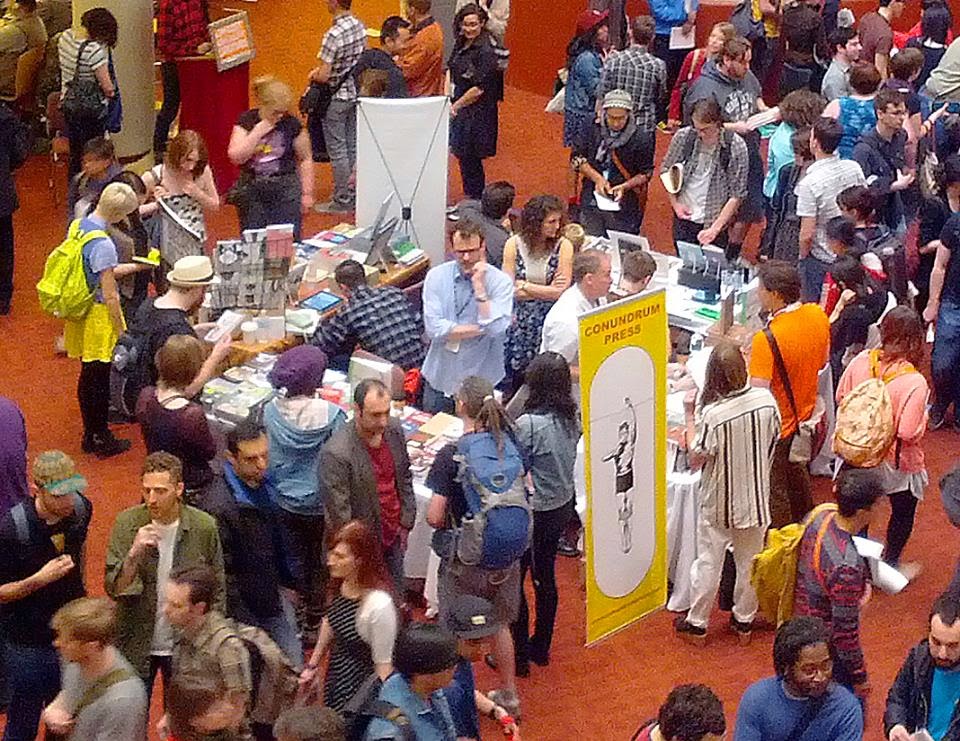 So TCAF was this weekend and it was fantastic as usual. This festival, run with the grace and precision of a Swiss Chalet chicken dinner by the Beguiling and their staff of a million cheerful, youthful volunteers. I could apologize for the blurriness of every shot from my cheap, elderly camera, but it's an aesthetic. Your limitations become your style, so they say. Just kind of squint as you look at them and we'll say my style is blurry… 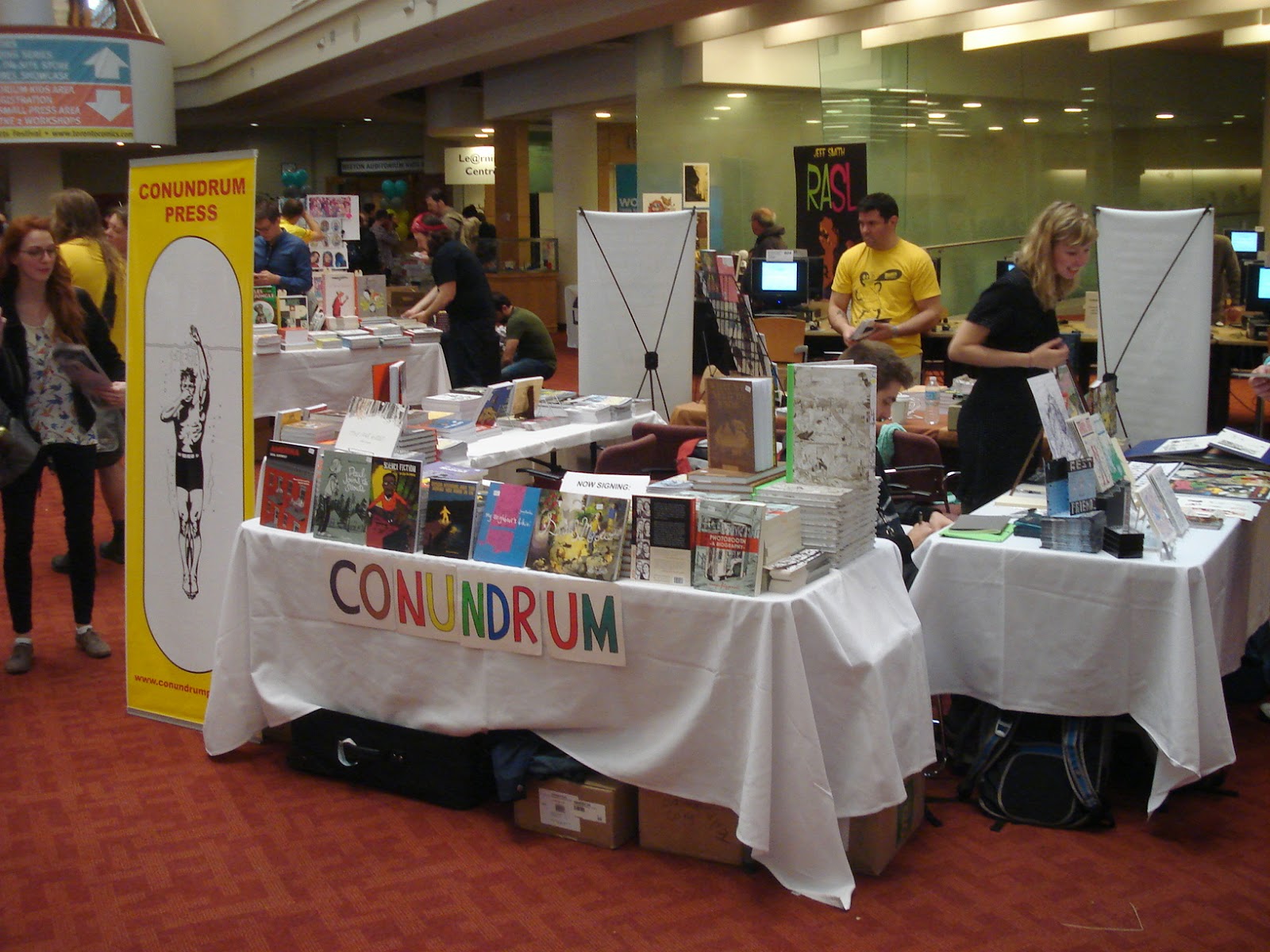 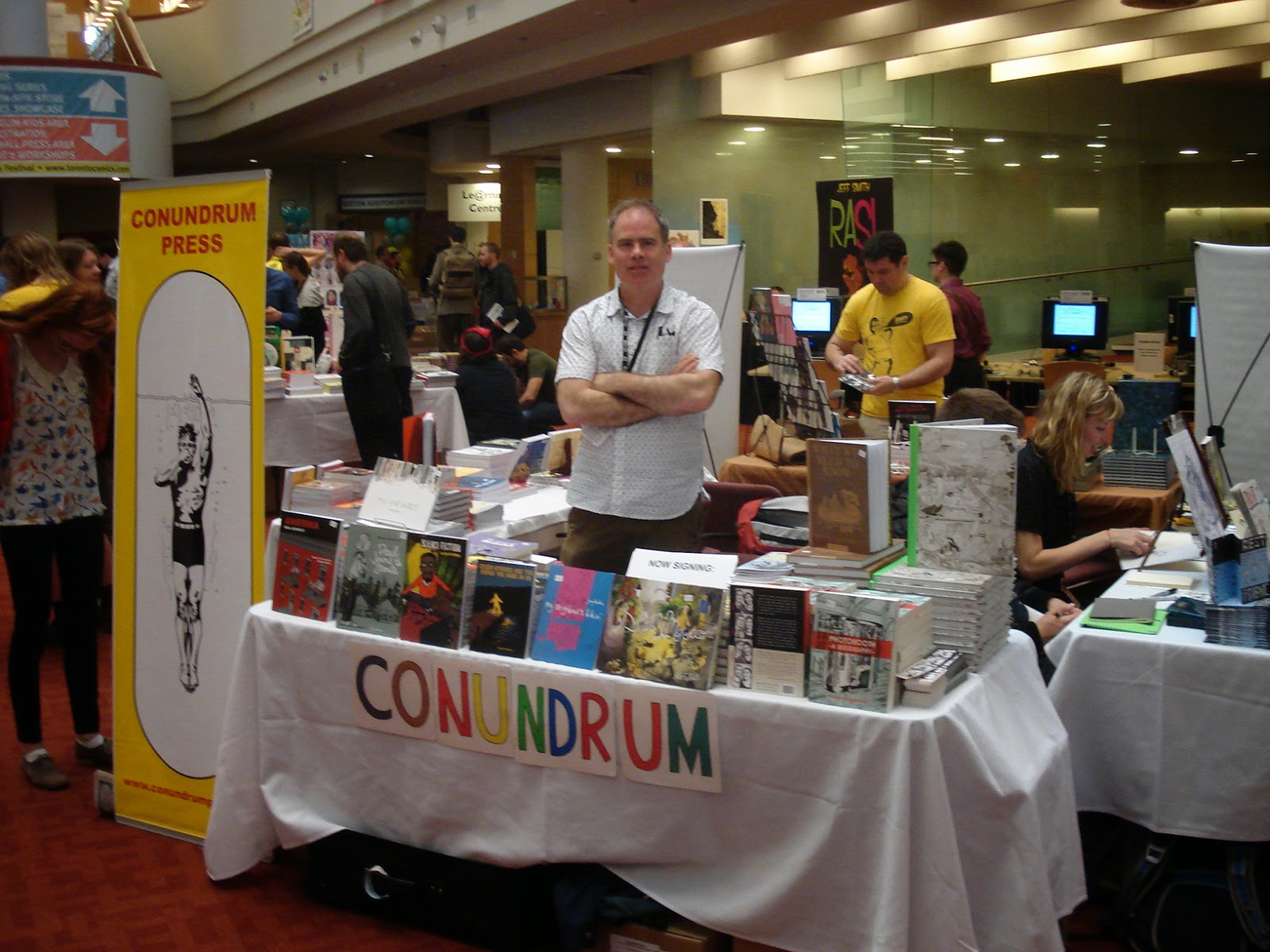 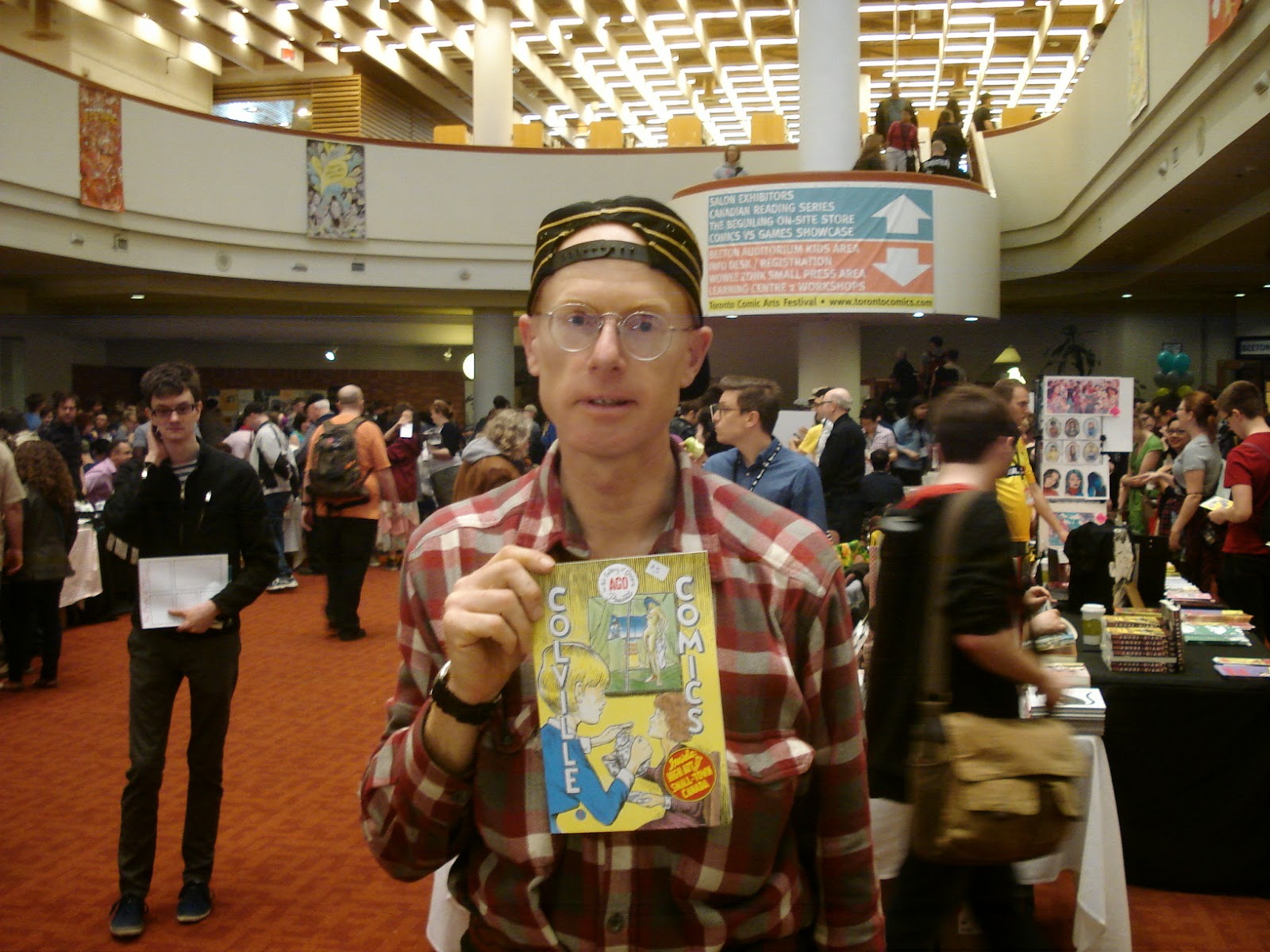 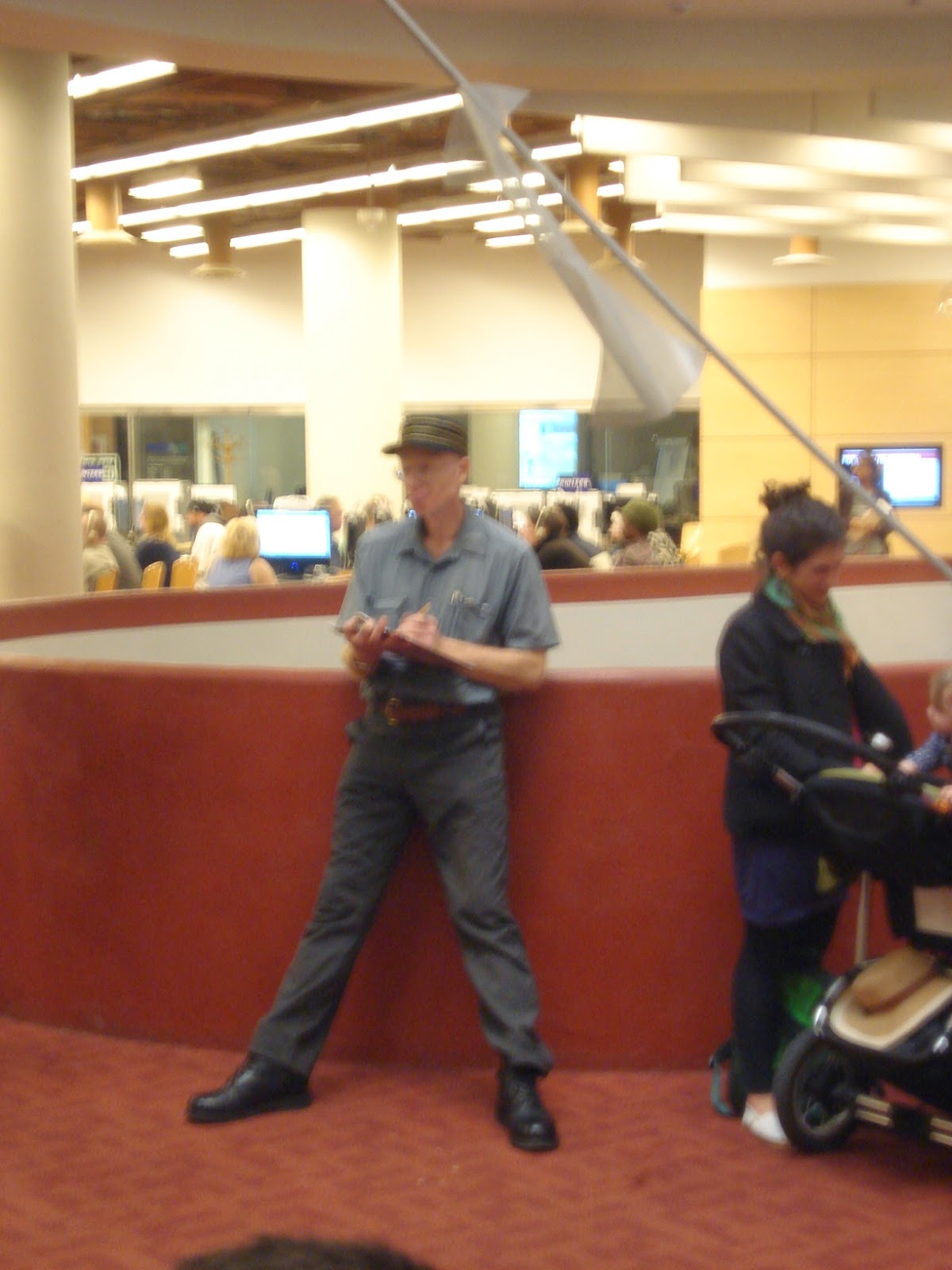 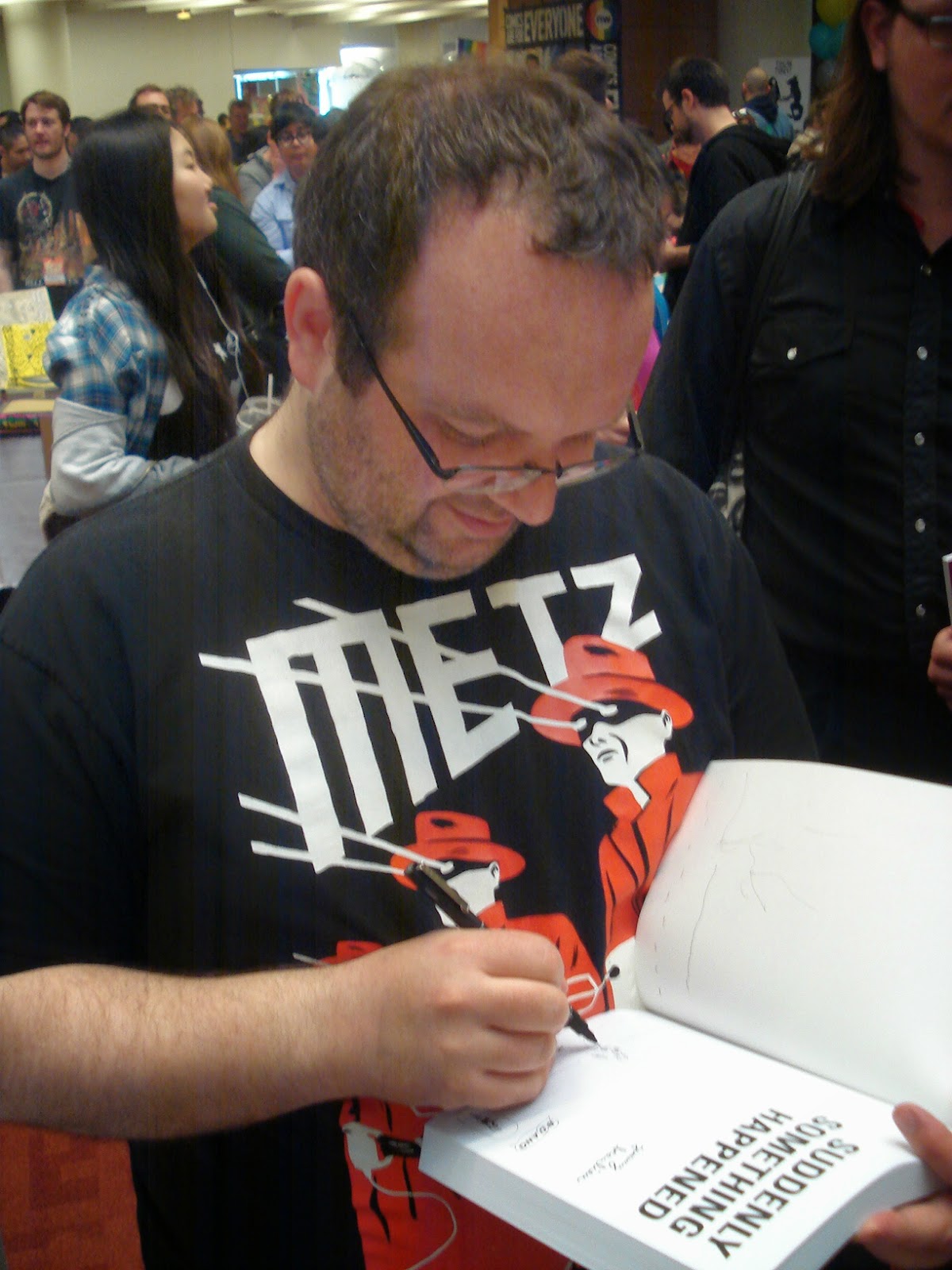 Jimmy Beaulieu gets to work right away. One of the nicest and most talented cartoonists in Quebec and I think no one draws beautiful ladies half as well as Jimmy. 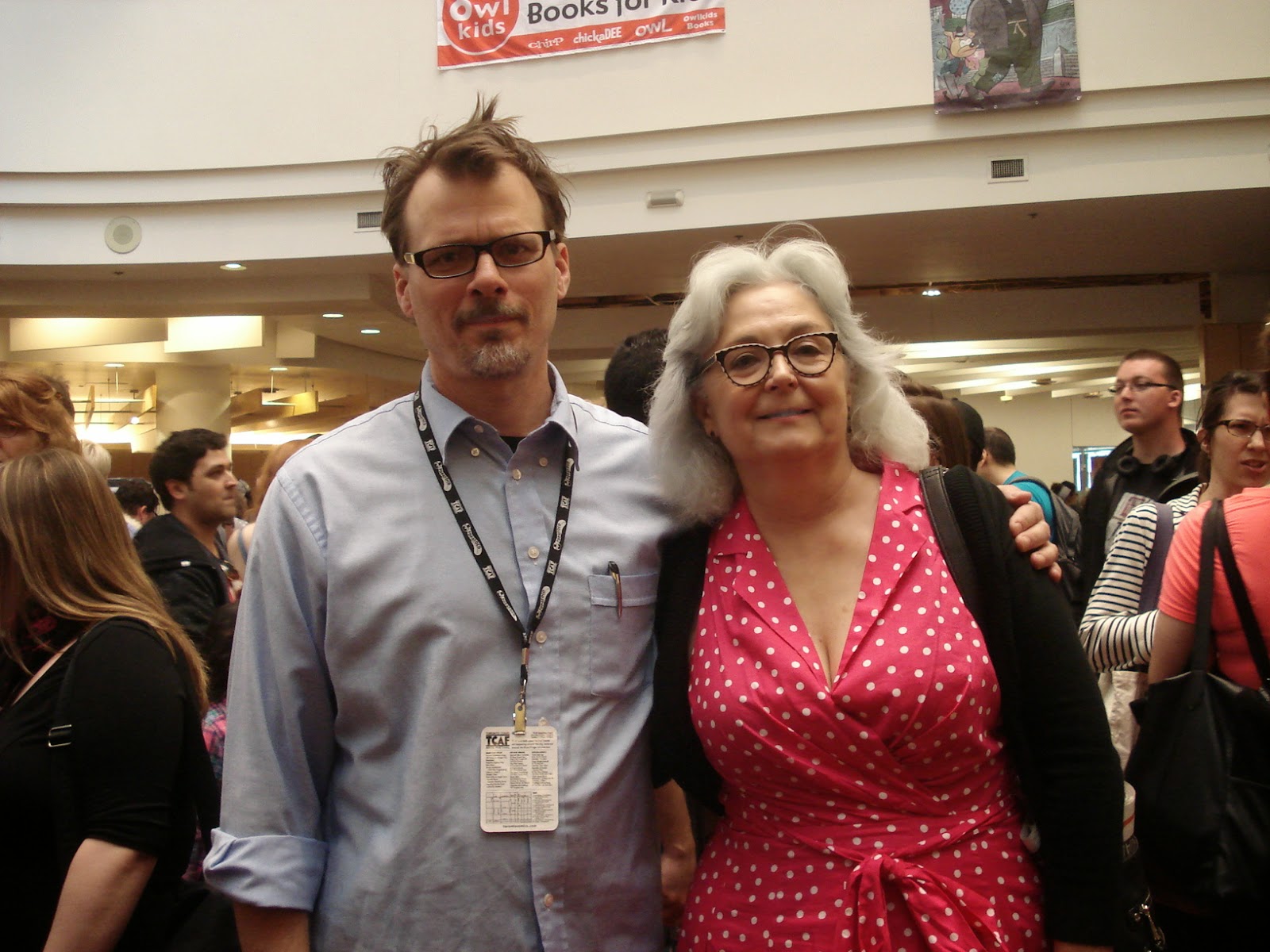 Okay, so I met Mimi Pond. There's been so much buzz (#1 on the New York Times Graphic Novel bestseller list!) about her book Over Easy and it's all well-deserved. She's a fantastic cartoonist and a great writer and so cool and after talking to her for two minutes you realize you want to be her neighbour so you can shout, “Hey, buddy!” to her while taking out the trash. The fact she knew who the hell I was and liked my work made me almost faint and was the highlight of the show for me. 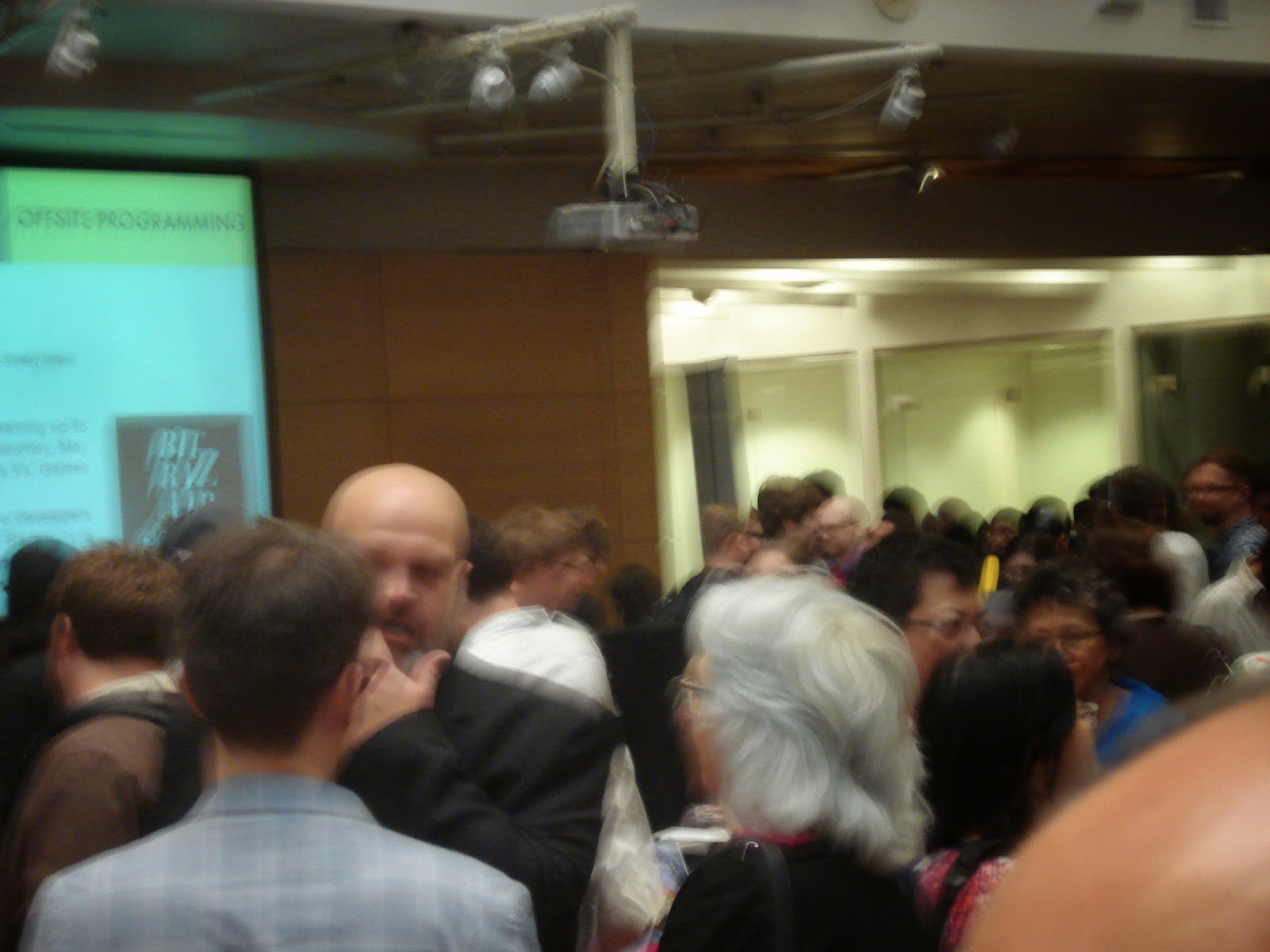 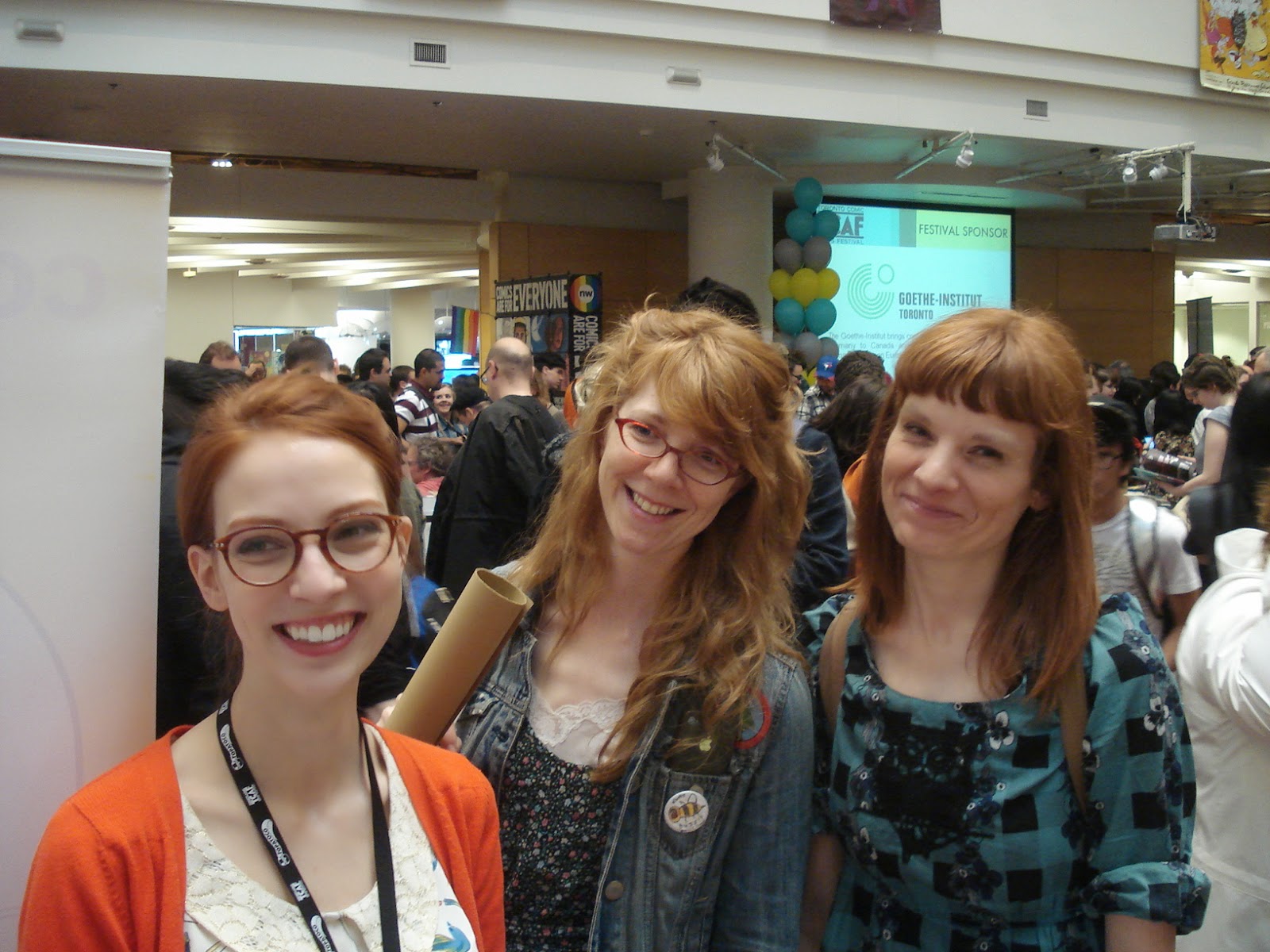 My hair felt not red enough around these 3 at the Conundrum booth. Meags Mitzgerald, of Photobooth (which sold like crazy and everyone was talking about), Shannon Gerard of the book Unspent Love and Serena Marie McCarroll of the book All Citizens. All talented, all nice. The theme of TCAF this year. 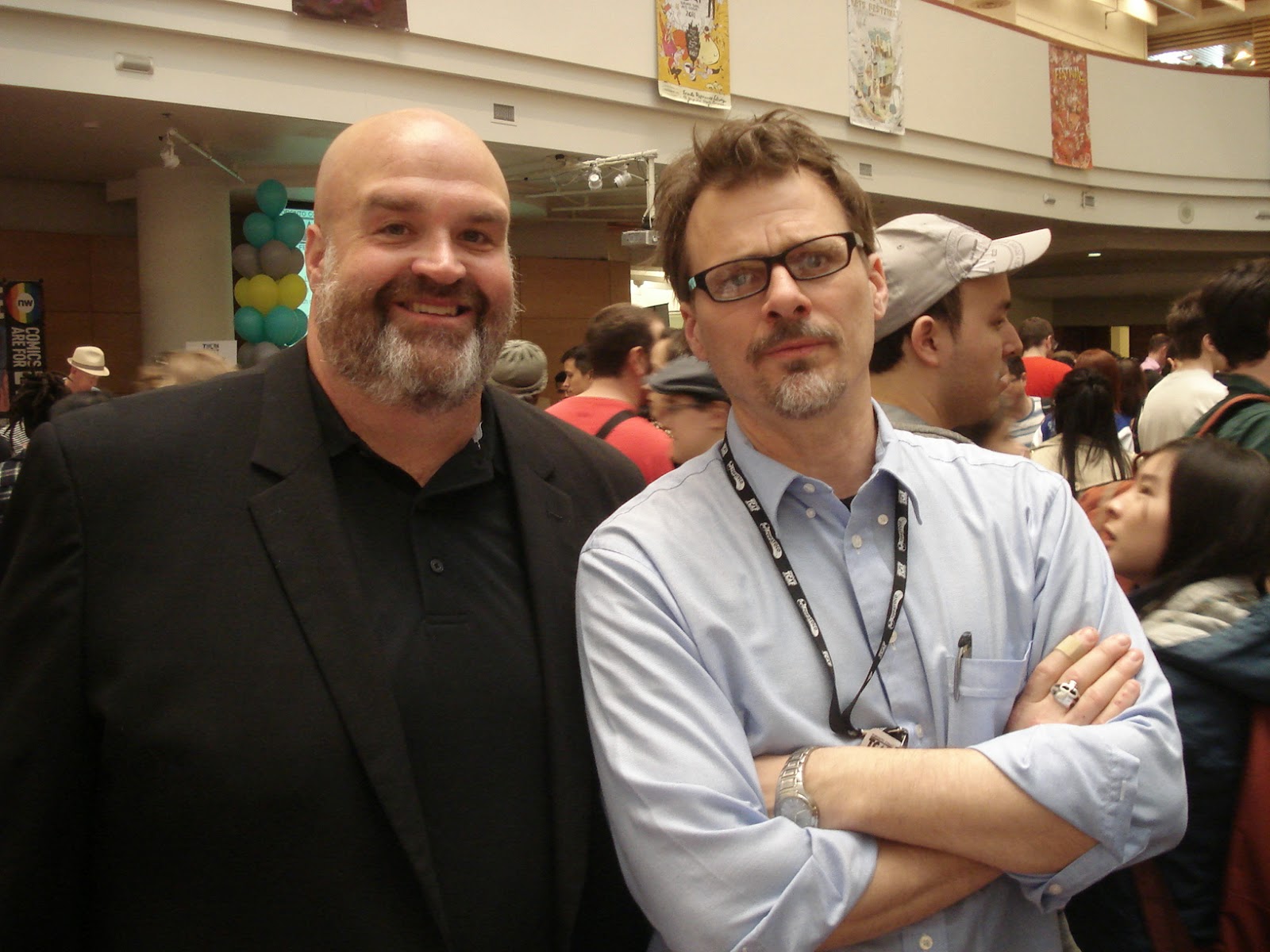 The Great Tom Spurgeon smiles benignly as I stay in crossed armed selling mode. You start every day with him, so put your arm around the spurge, Ollmann, you cold fish! 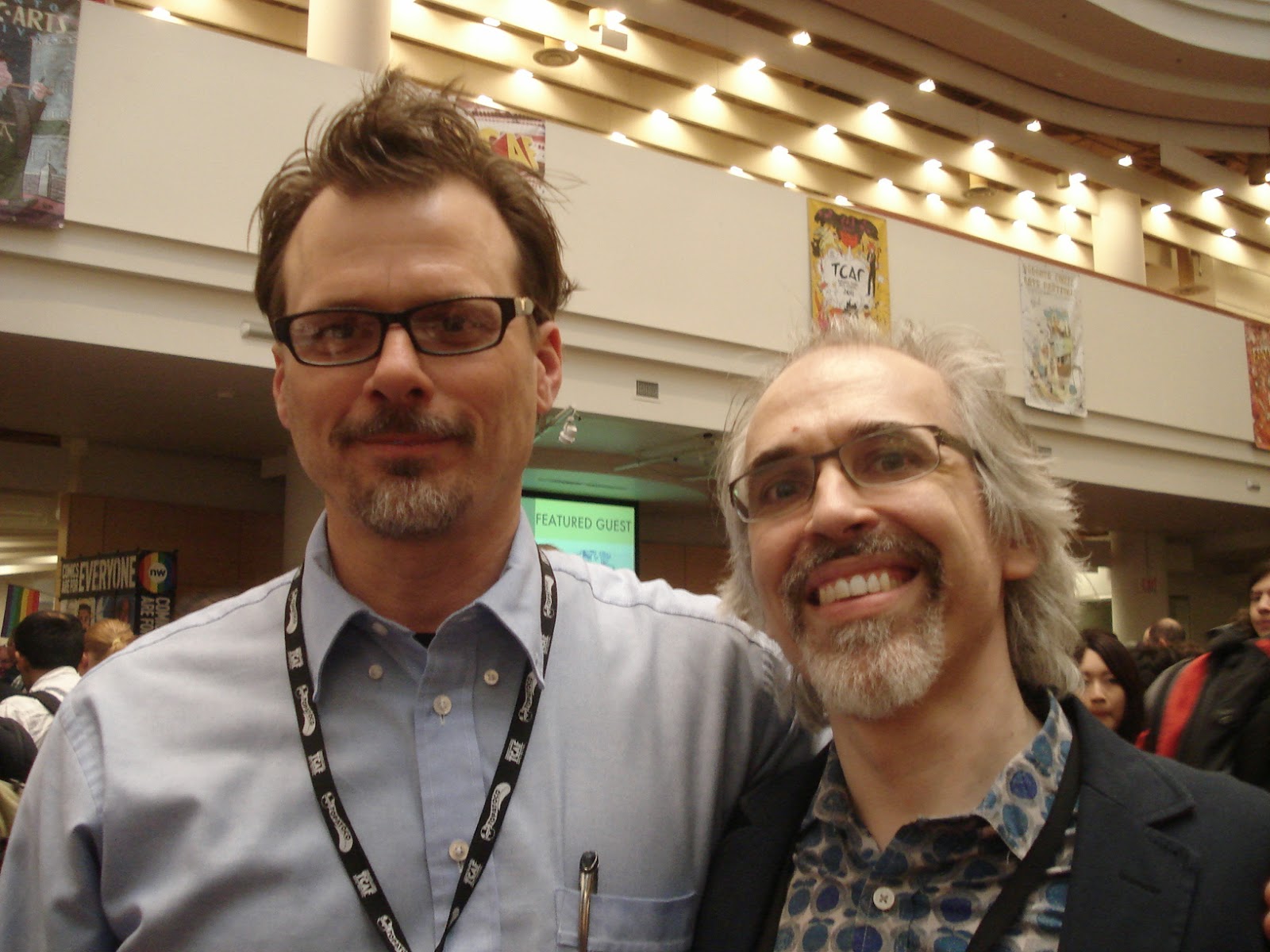 Bob Sikoryak! I love this guy! and one of the deftest, ablest, smartest and funniest cartoonists alive. I wish Bob was my neighbour too. 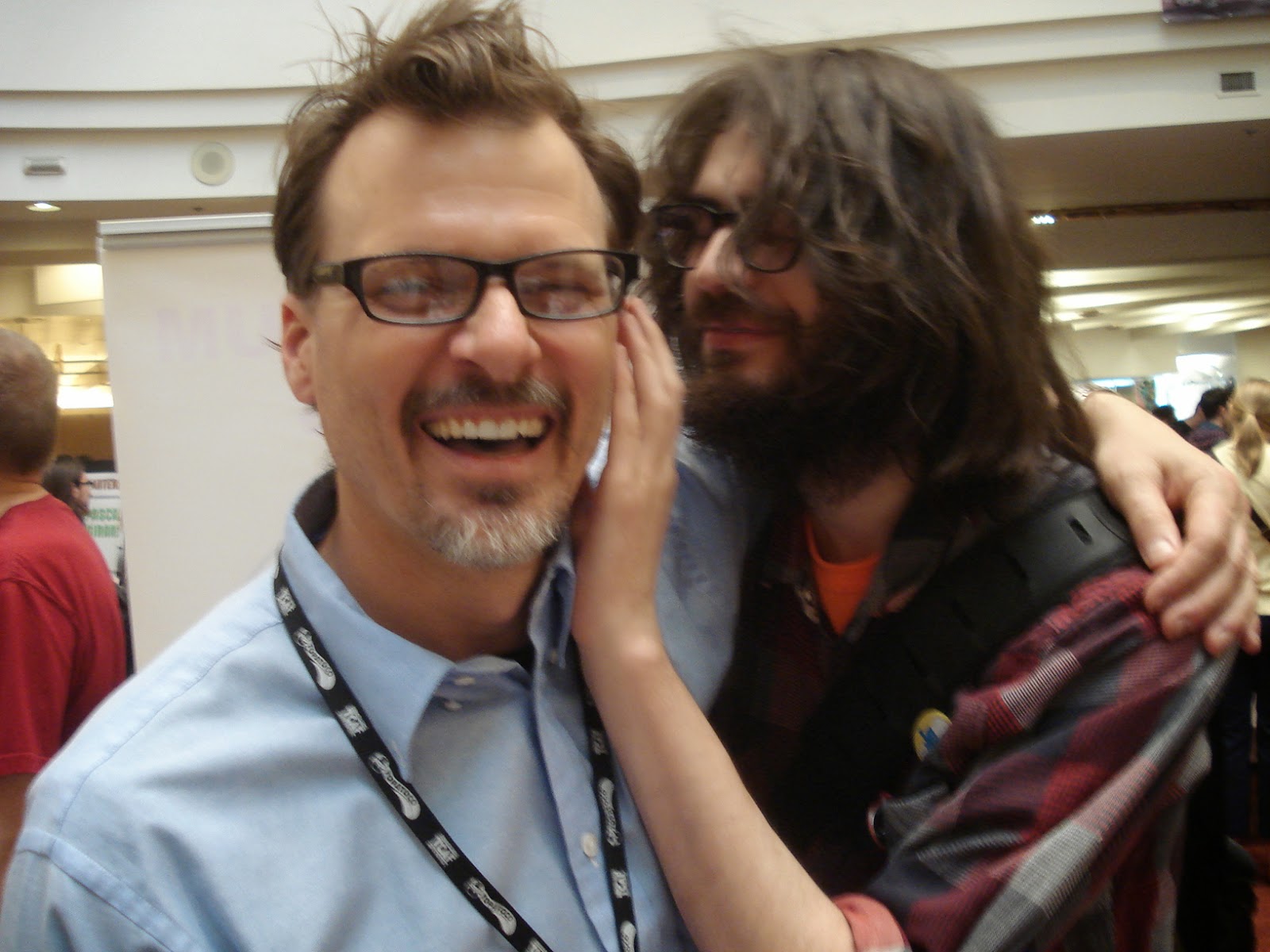 The lovely and talented Vincent Giard canNOT keeps his hands off me. He's another Brecht Evans. Yeah, those are my real teeth, not giant false ones. Can't believe how old I look in some of these photos, like this one below with me and Matt Forsythe: 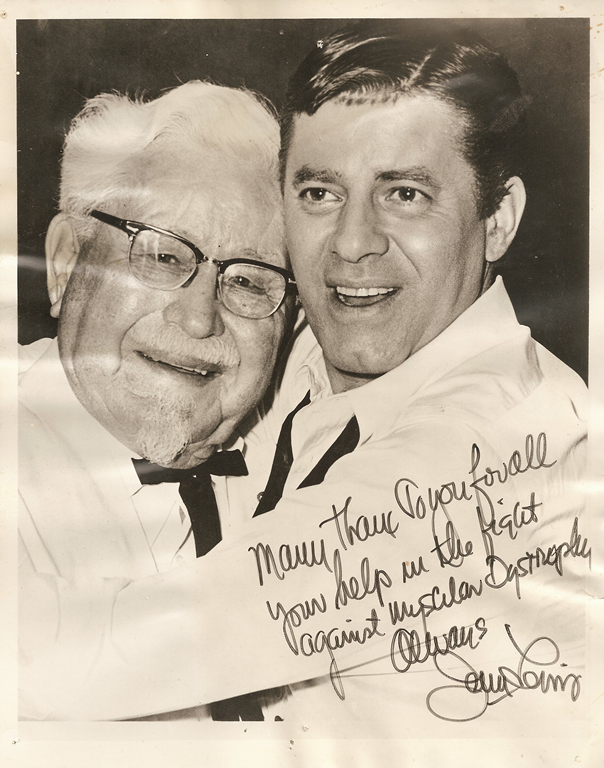 (My grandkids, yeah, I have grandkids, think I look like the Colonel.) 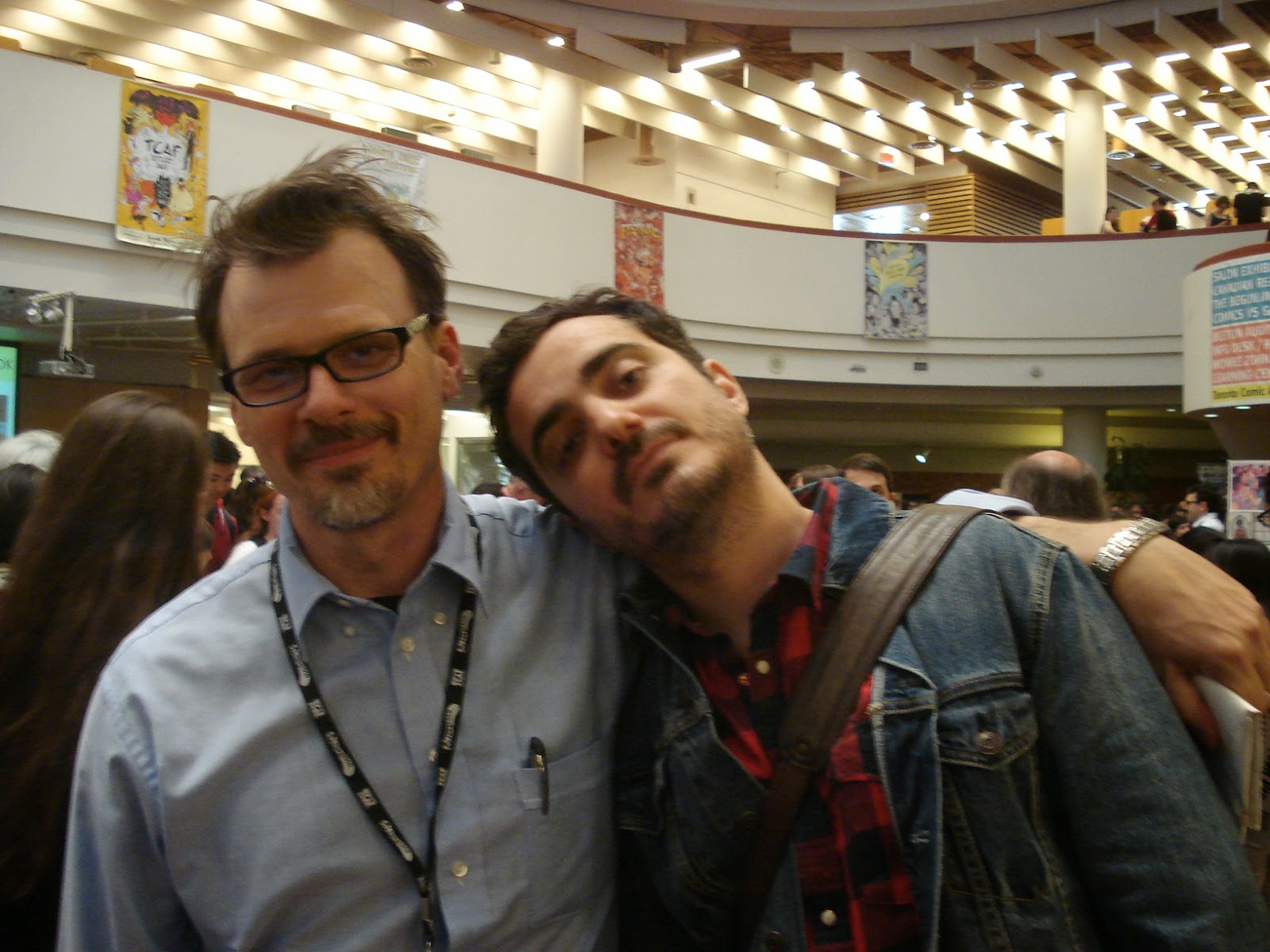 Hollywood has NOT ruined these two guys. Another shot with old Buddy, the sweet and talented Matt Forsythe had a short nap on my shoulder. 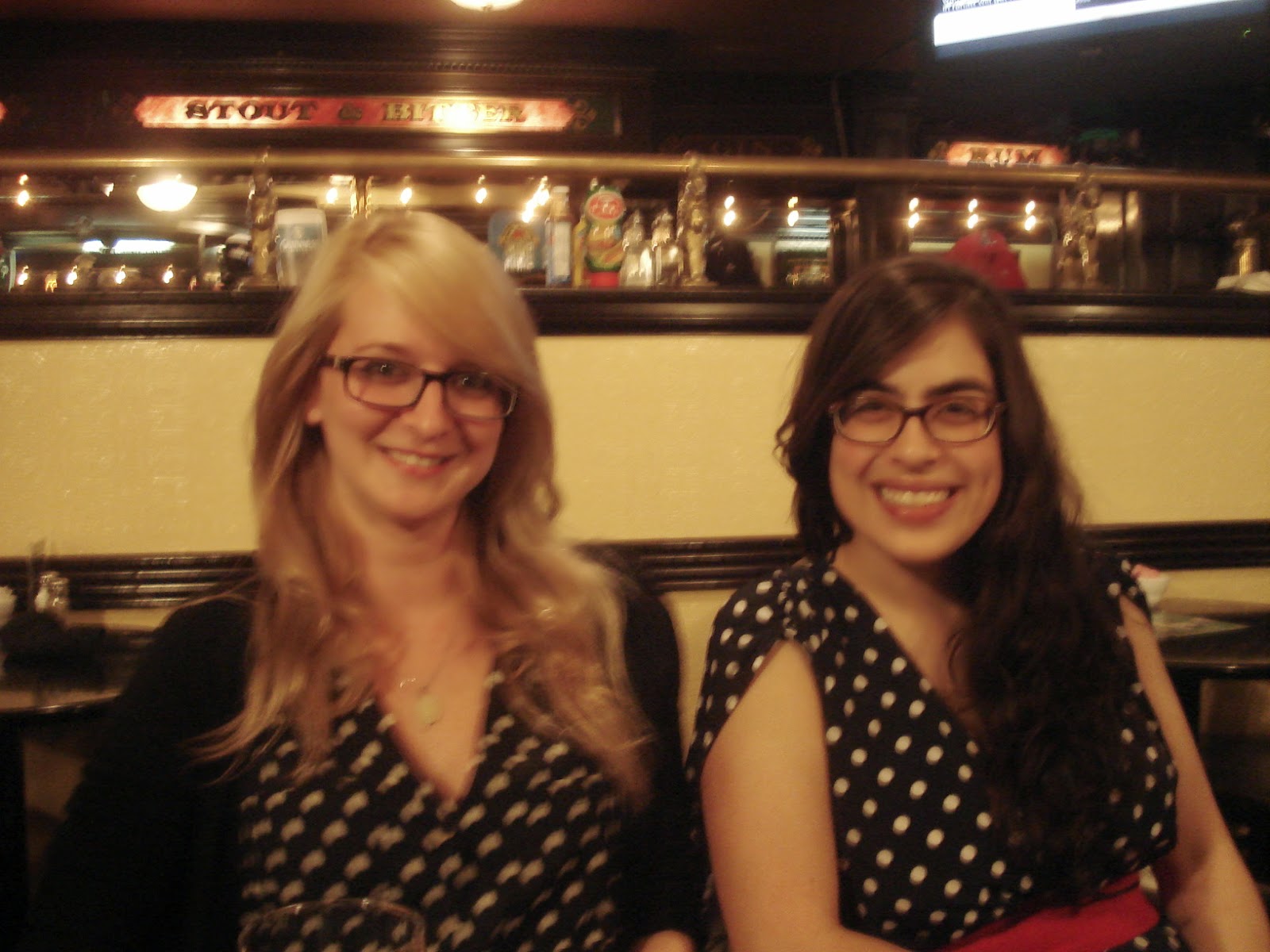 My Daughter Liz came out for a drink after she watched her old man lose the Doug Wright Awards. Julia from D & Q sat next to her and they were rocking the same frocks! Cute! 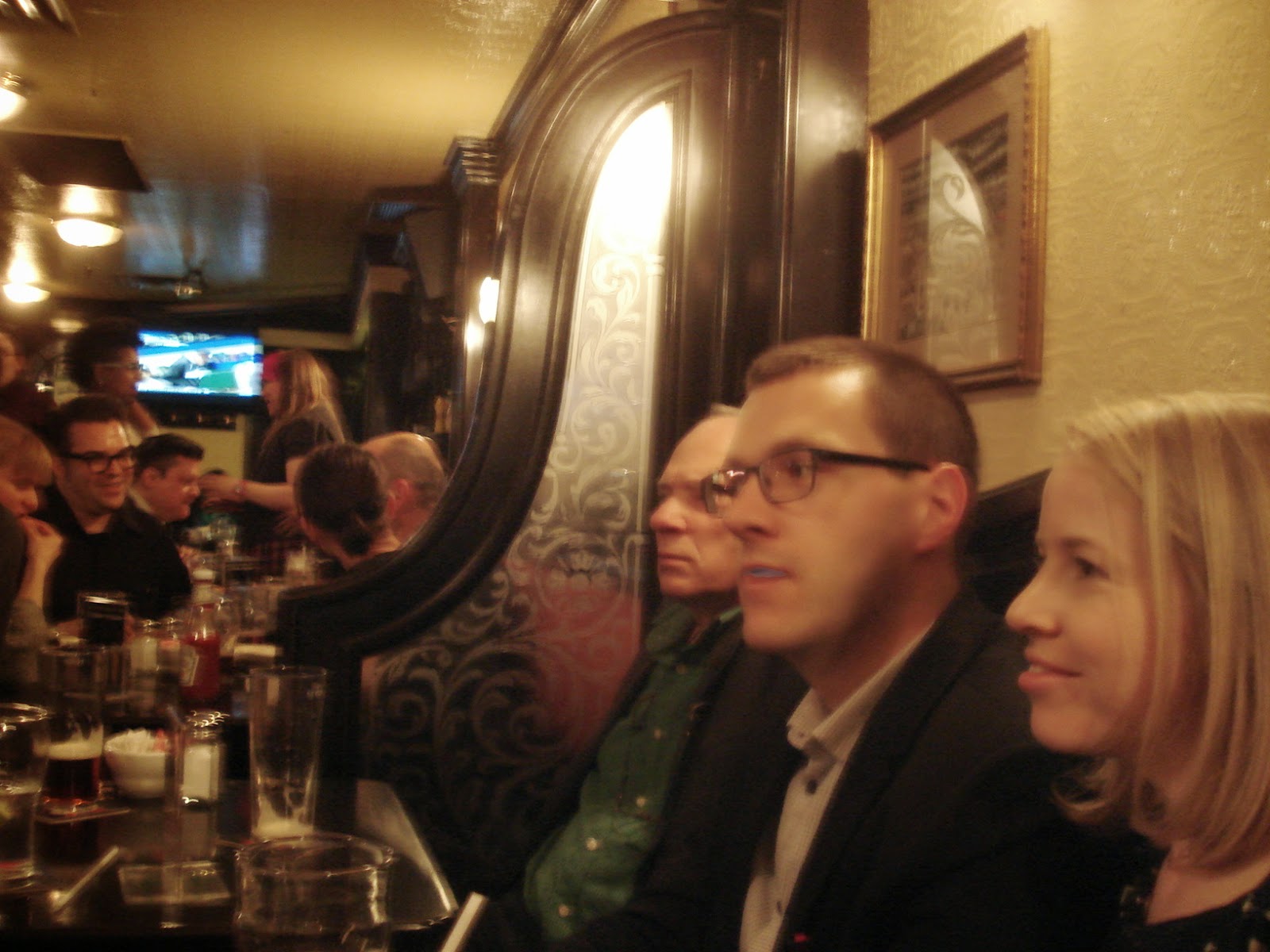 These two.
Love them. Rebecca Lloyd and my sweet Pascal Girard, getting ready to spit a “chaw” of tobacco I think. Next to Pascal, Réal Godbout, who debuted (is that word? Spell-check is not offering: do you mean Dubrovnik?) his Conundrum debut in English, his stunning adaptation of Franz Kafka's Amerika. Great to meet Réal, a master clean line cartoonist (Red Ketchup) and to watch him, calmly and politely handle this exchange: 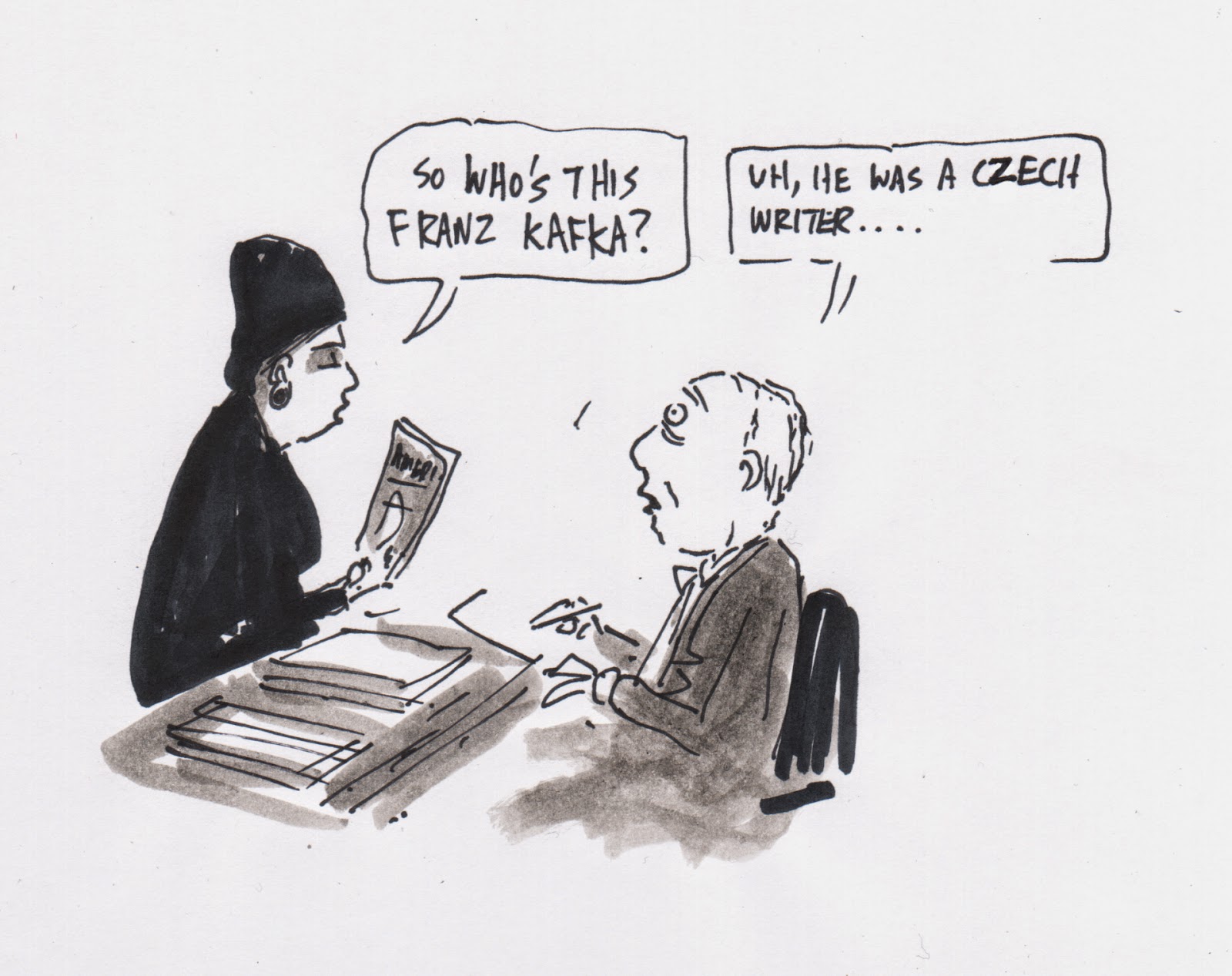 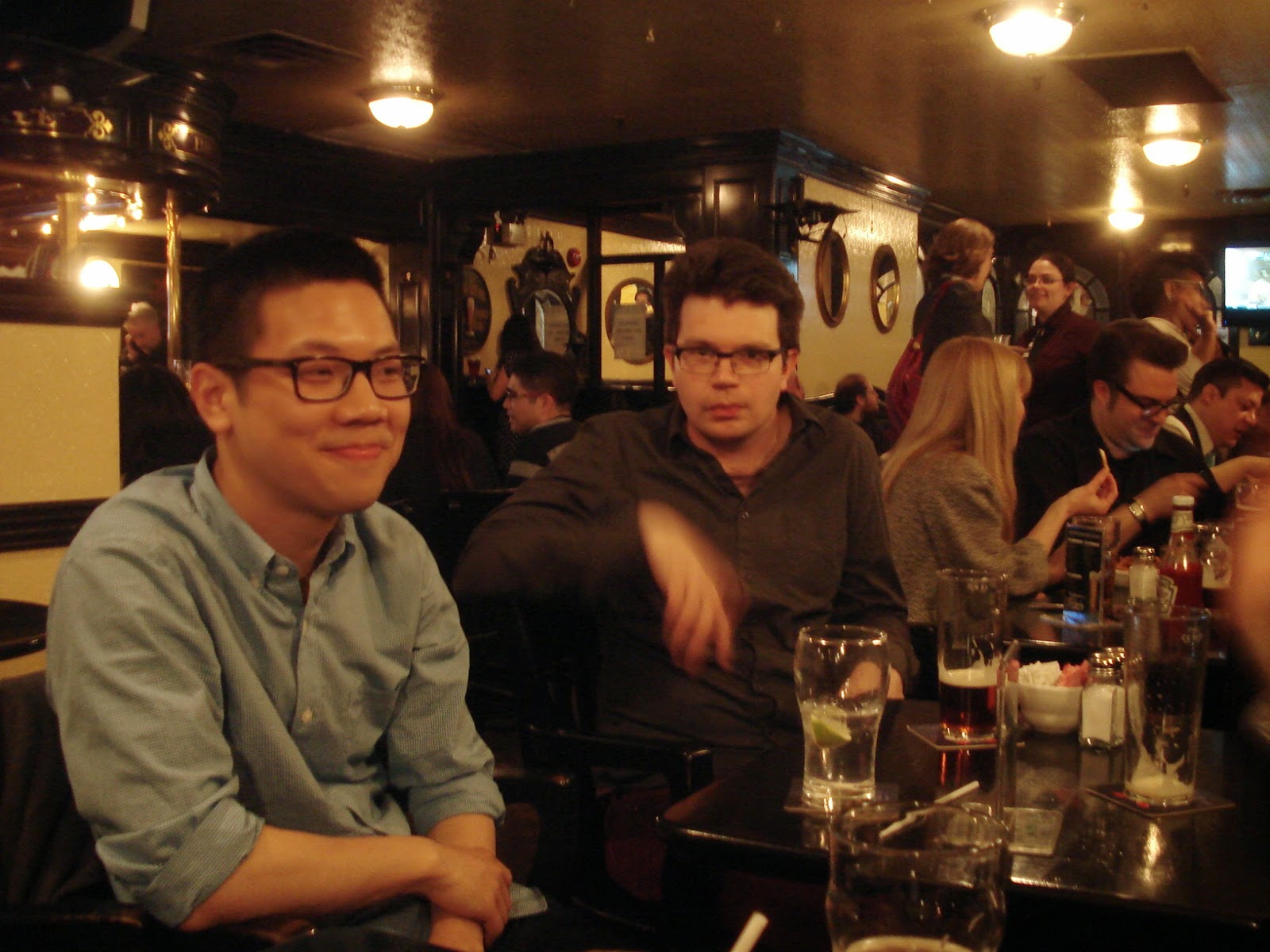 Spotted Dick shots (the name of the bar. i got nothing): Ethan Rilley, of Pope Hats one of the most talented young cartoonists I know, also one of the nicest and I love that combination.  Alex Fellows, smouldering a blue steel pose at me here. Fellow's debuted Spain and Morocco with Conundrum at TCAF, full-colour, hardcover, funny and beautiful. Yeah, he's nice too. This kid's great! As the night progressed, he EMPHATICALLY expressed his love for Dan Clowes and we all agreed. My ol pal, the insanely talented Nina Bunjavic wearing some kind of Chanel supermodel outfit and old Conan Tobias was selling a GREAT giant Taddle Creek newsprint comics supplement, which you should GET! See below Collier models it. 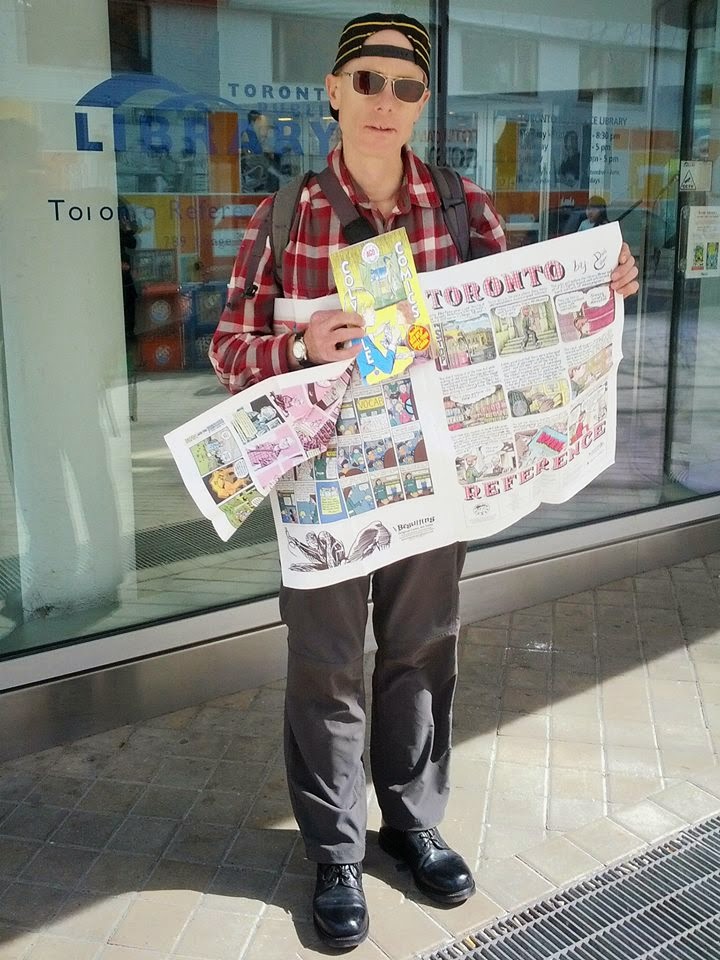 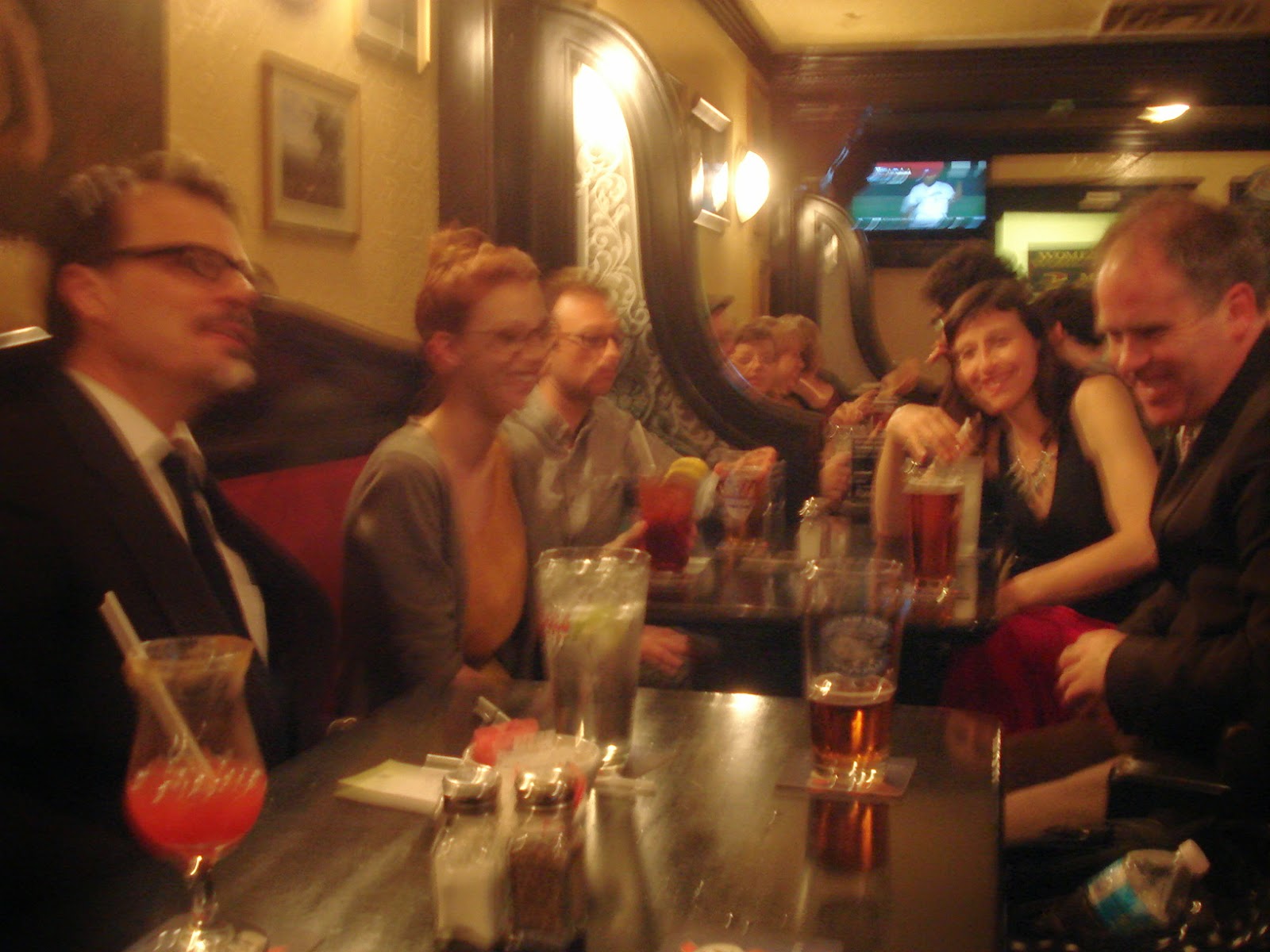 the quintessential Selfie. (my arms are super long)
Ol' Joe, Meags F, Nick Mandaag, one of the FUNNIEST cartoonists to exist, happy to see he has a new book, Facility Integrity, with Alvin Buenaventura's Pigeon Press. and Christy Ann Conlin, author of the Doubleday novel, Heave and presenter of the great CBC radio series Fear Itself, which you should listen to. 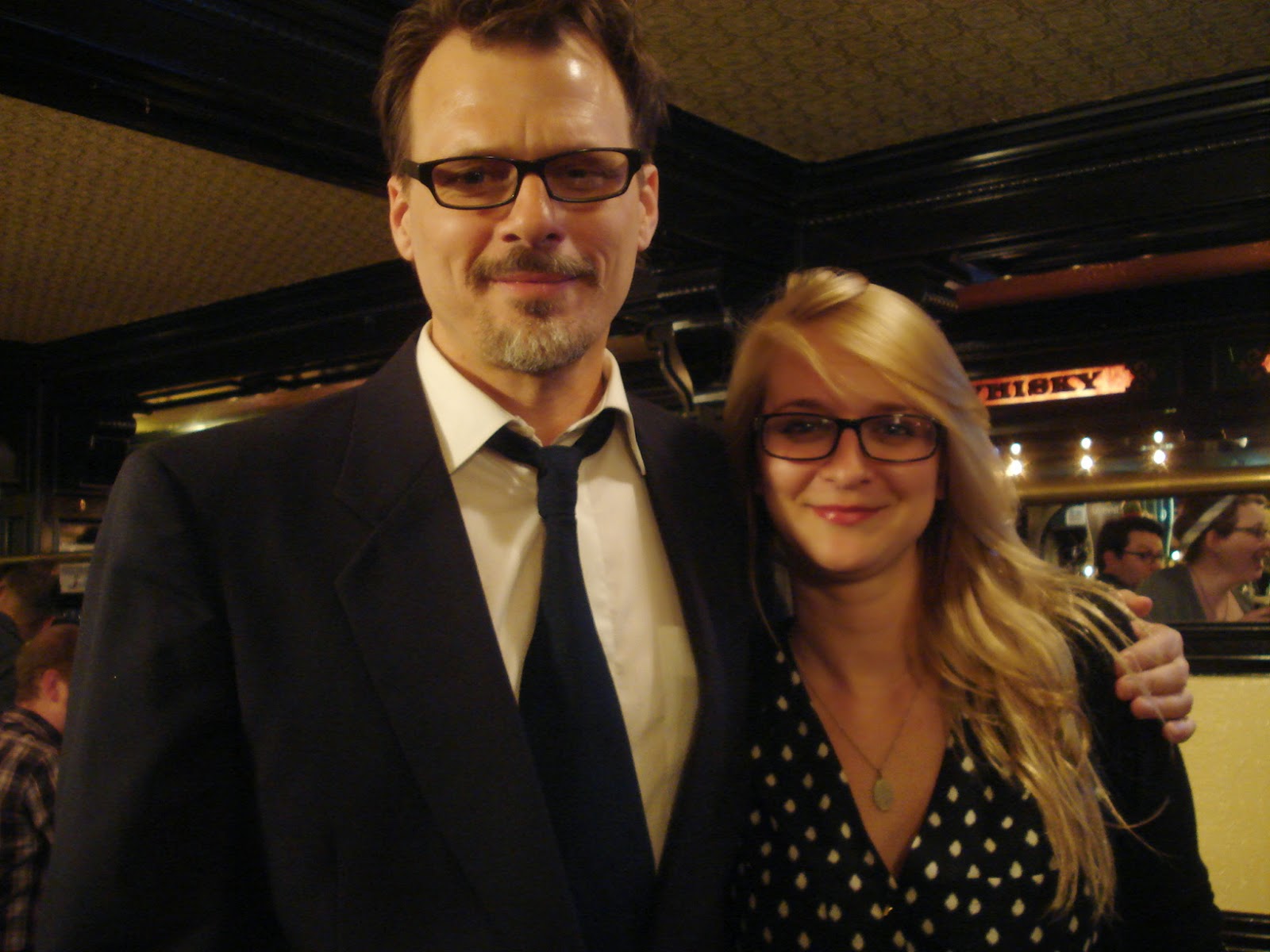 One of my beautiful daughters! I'm wearing my dear old dad's old suit. 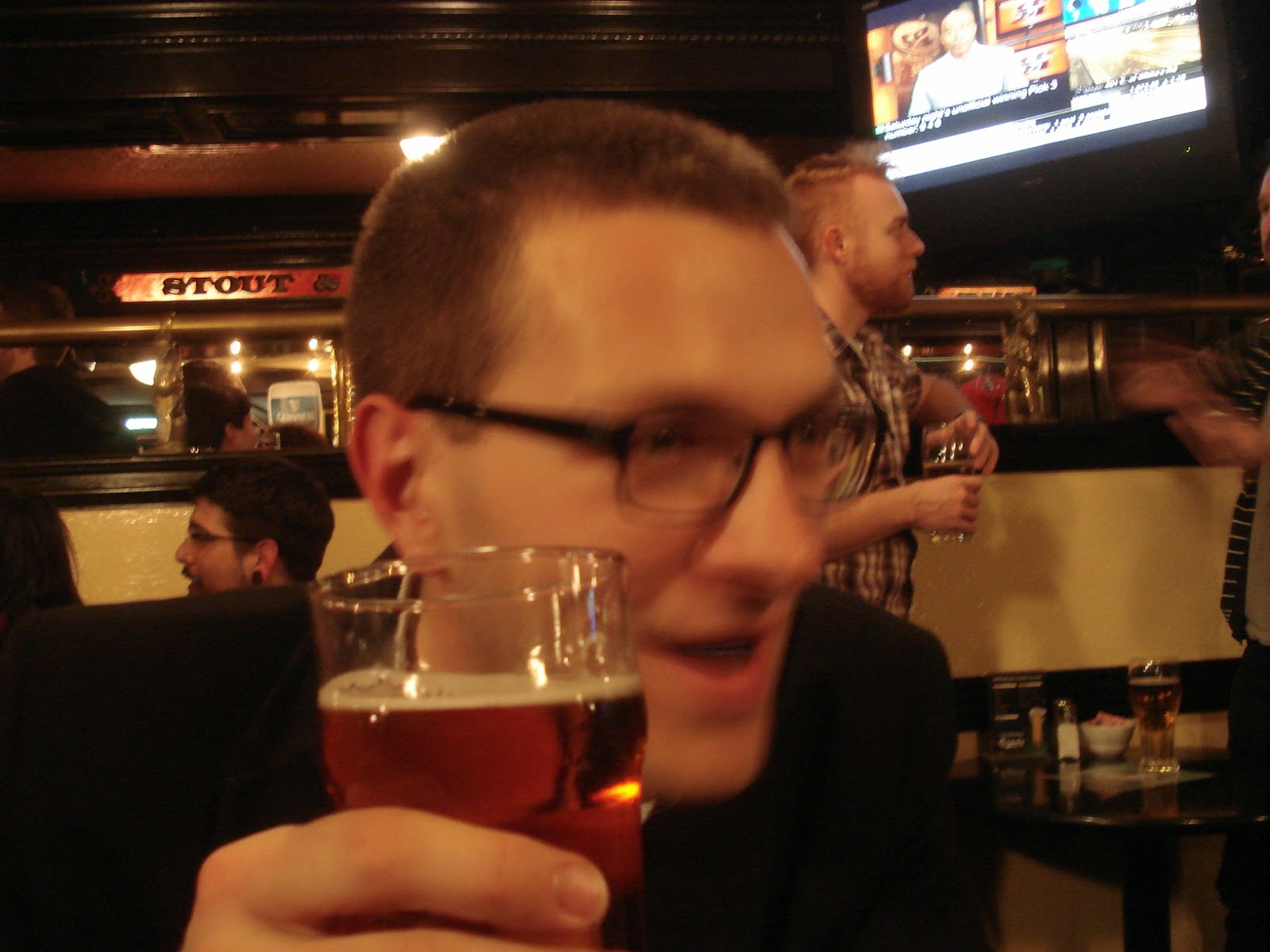 Ollmann, you don't know what you're talking about, so sit down.  Yes, Mr. Girard. 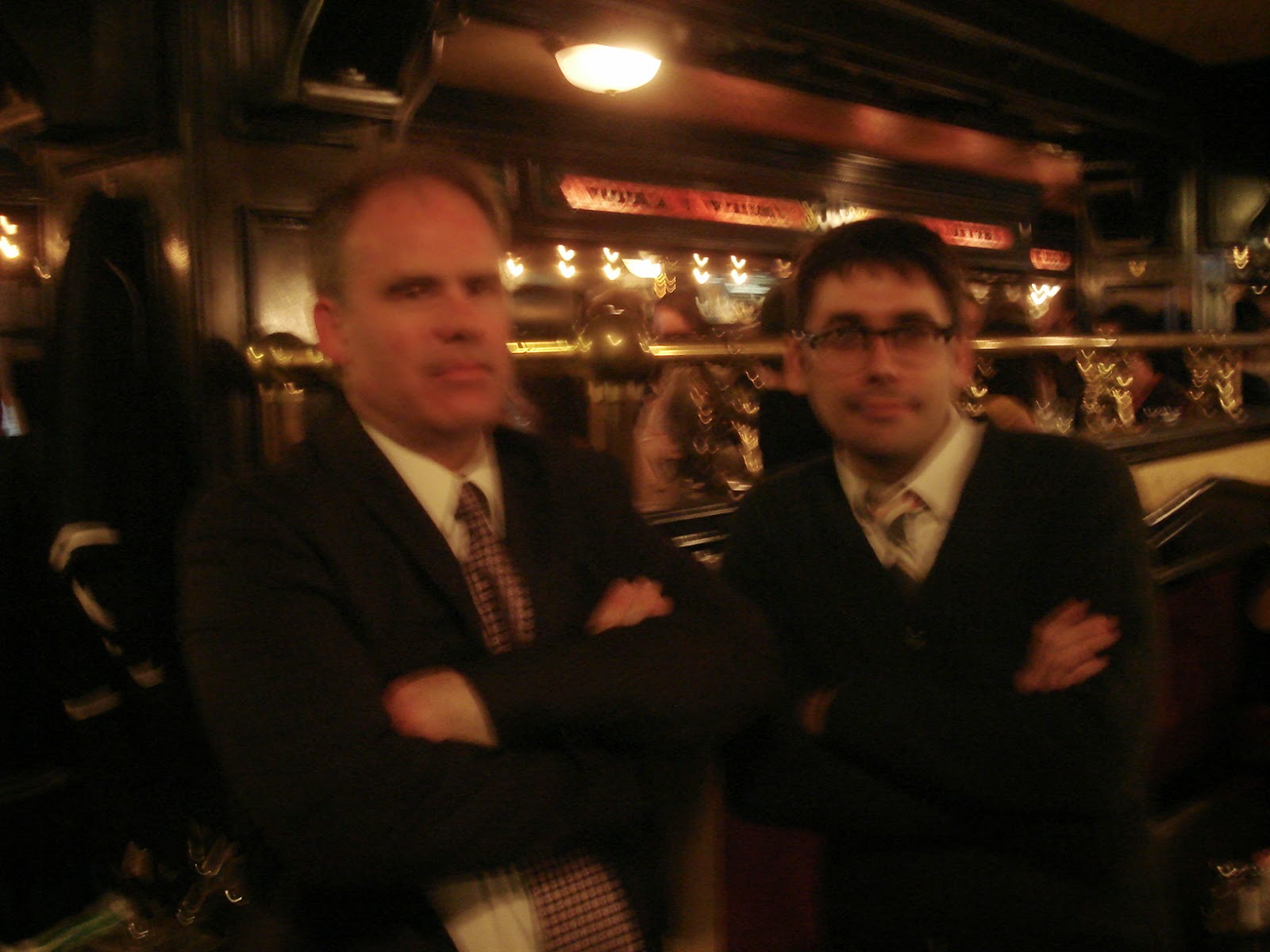 Andy and Dakota McFadzean, another cartoonist who is as talented as he is nice. Also, this guy is one of the hardest-working people out there. and it pays off he just gets better and better. He's going places. 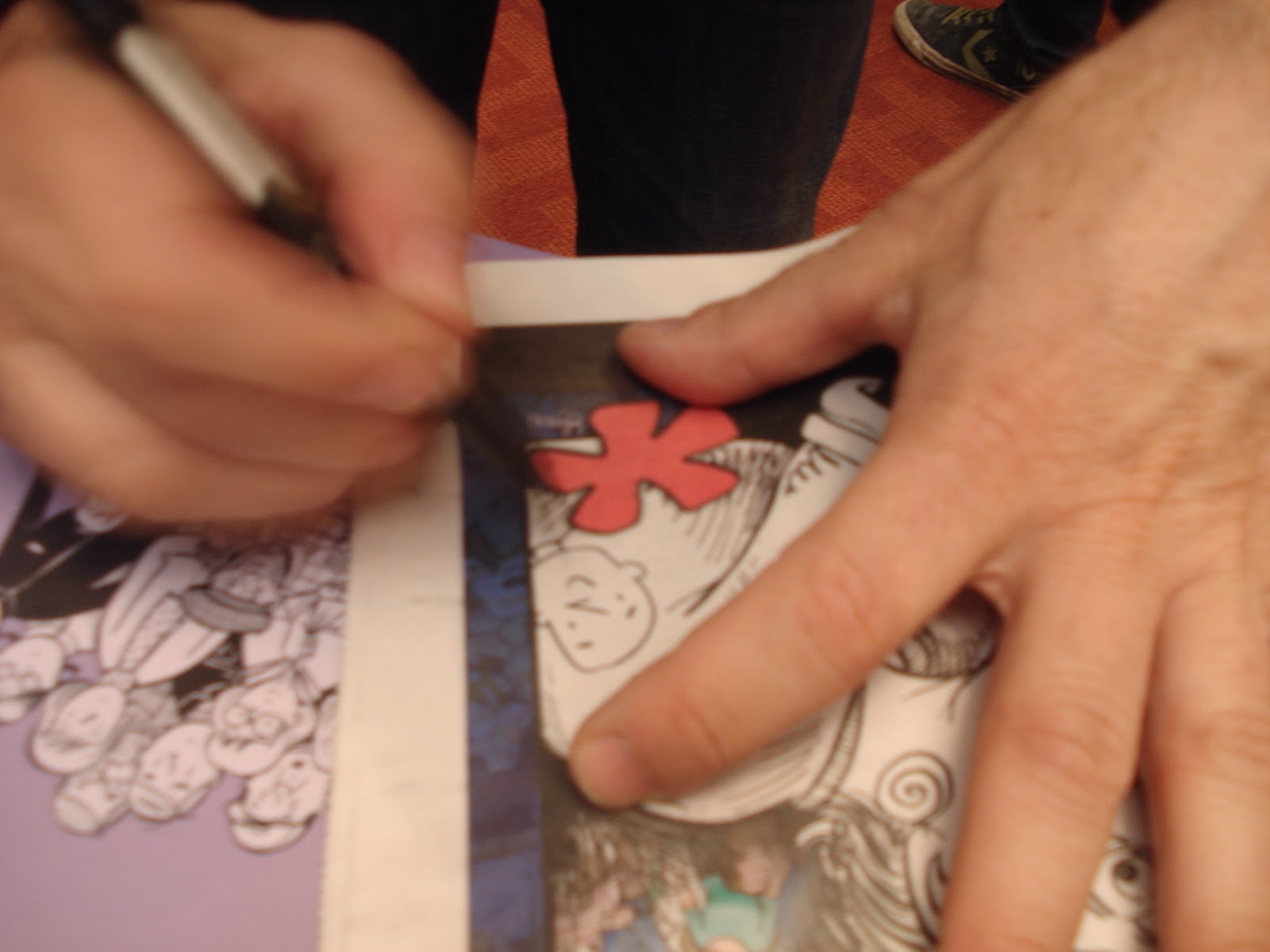 Post-modern. Michel Rabagliati, draws on a Lynn Johnston drawing on a fan's festival guide. Michel won the Doug Wright Award for the Conundrum English edition of Paul Joins the Scouts, a great book and well deserved. I only caught the end of the festival opening talk with The great Ms Johnston and Kate Beaton Raina Telgemeier.

It's fine that I didn't win, I'm happy for my pal Michel.
The photo below of me Hamburglarin' his award was staged by Brad McKay (Great job on the Doug Wright Awards to everyone involved!) 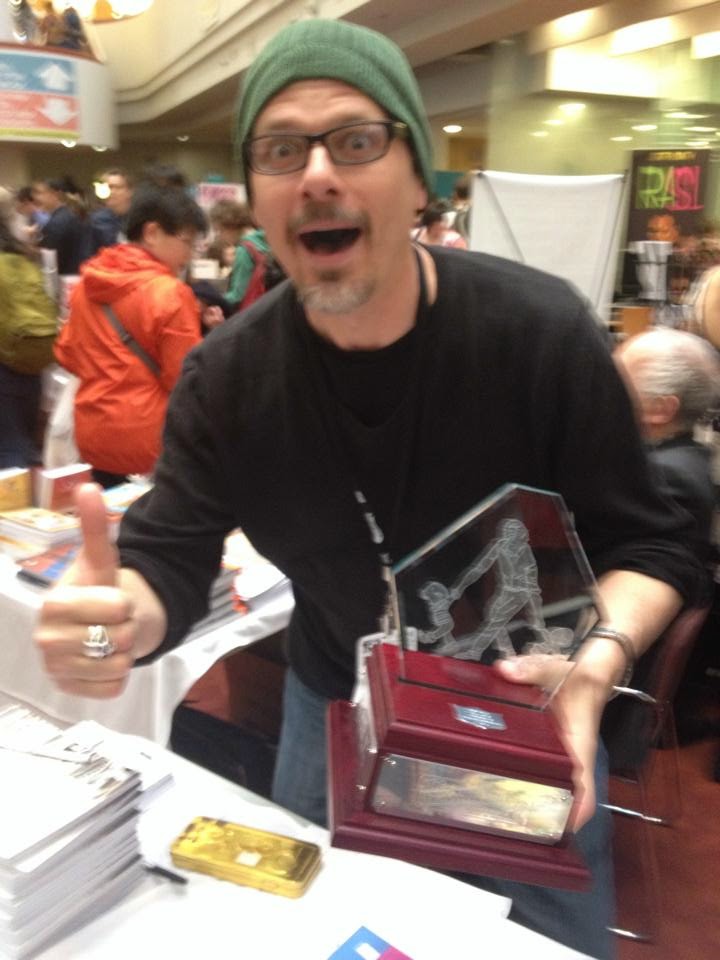 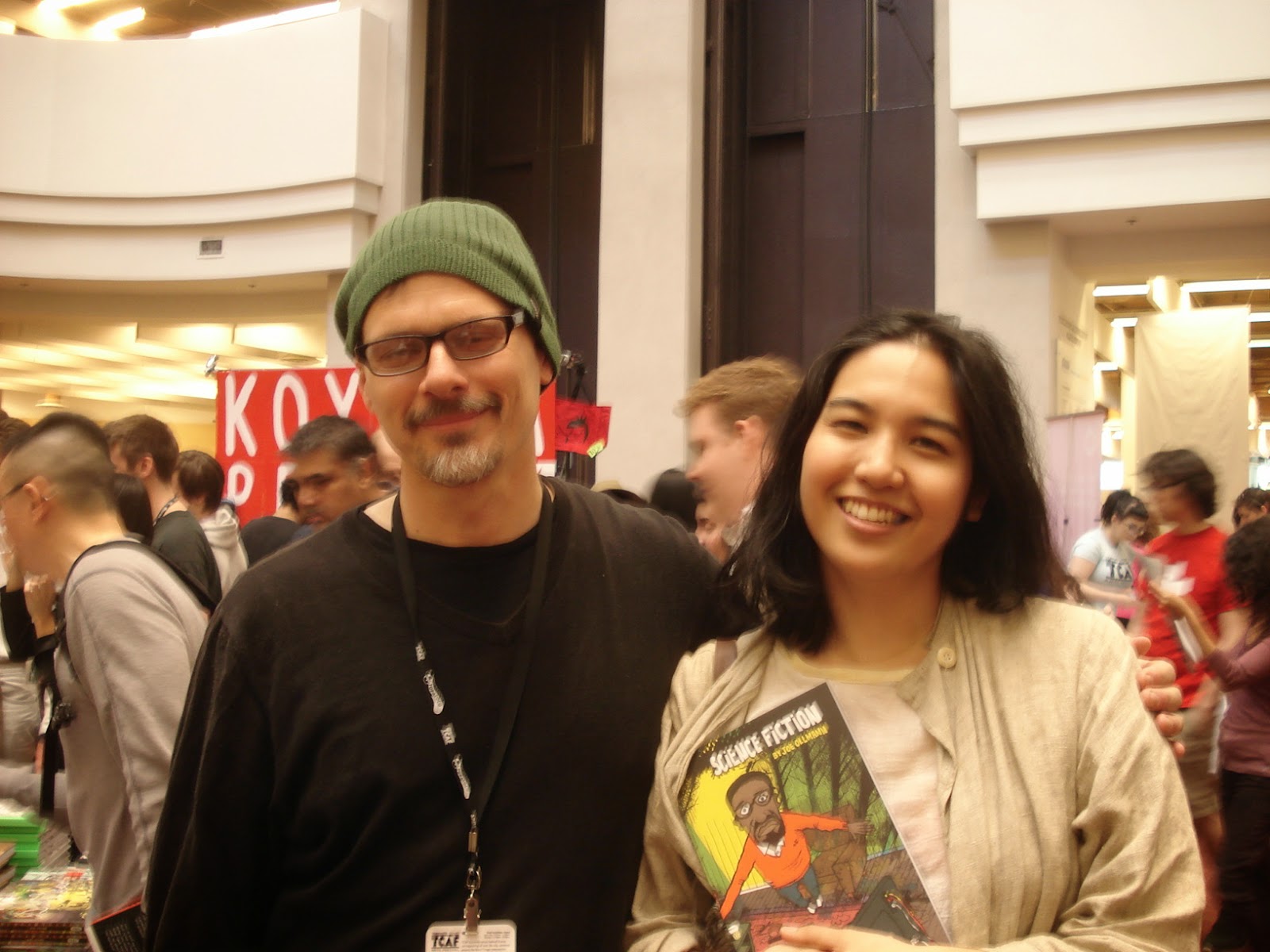 My old Pal, the mega-talented and equally nice, Jillian Tamaki came to say hi. Her new book with Mariko Tamaki, This One Summer looks incredible and I am stoked, as you say, to read it. I photoshopped a copy of my Doug Wright Award-losing Conundrum Press book, Science FIction in her hand. I took out my false teeth and both glass eyes in this shot. 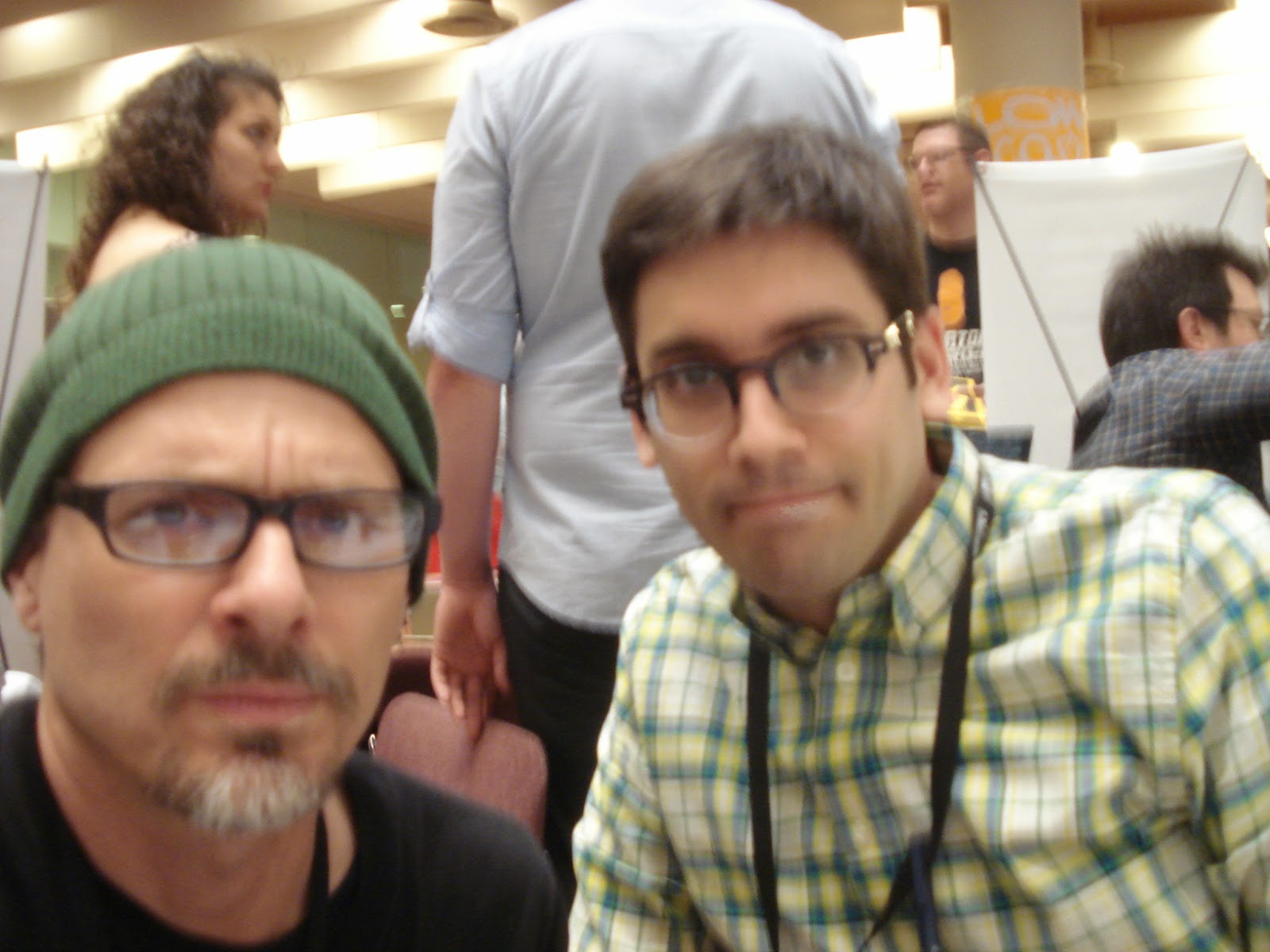 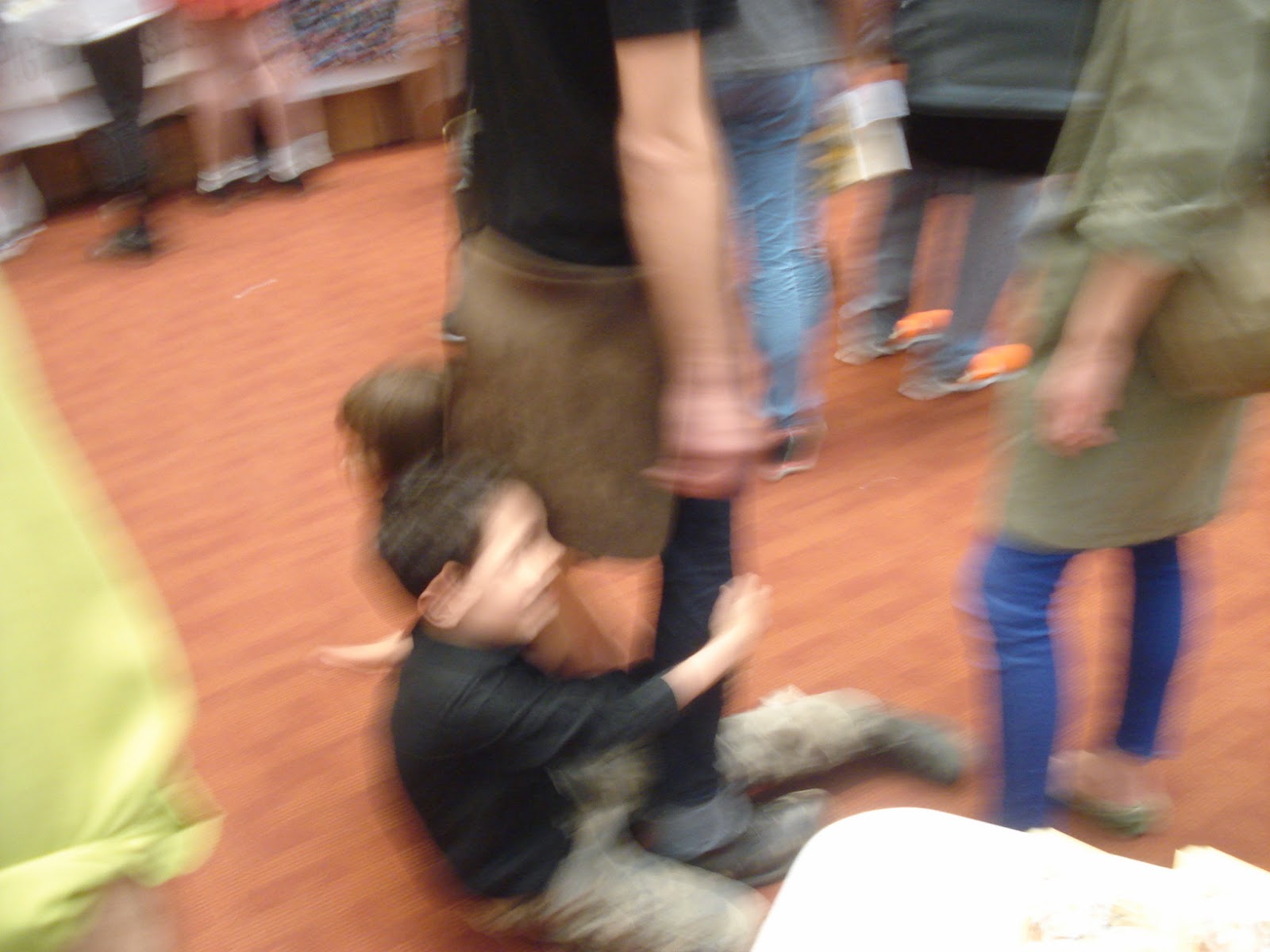 “From the foldings of its robe, it brought two children;
wretched, abject, frightful, hideous, miserable…
This boy is Ignorance. This girl is Want. Beware them both…” – Charles Dickens.

This scene from a Christmas Carol was enacted in front of our booth for like 20 minutes. Kids LOVE Indie Comic shows. 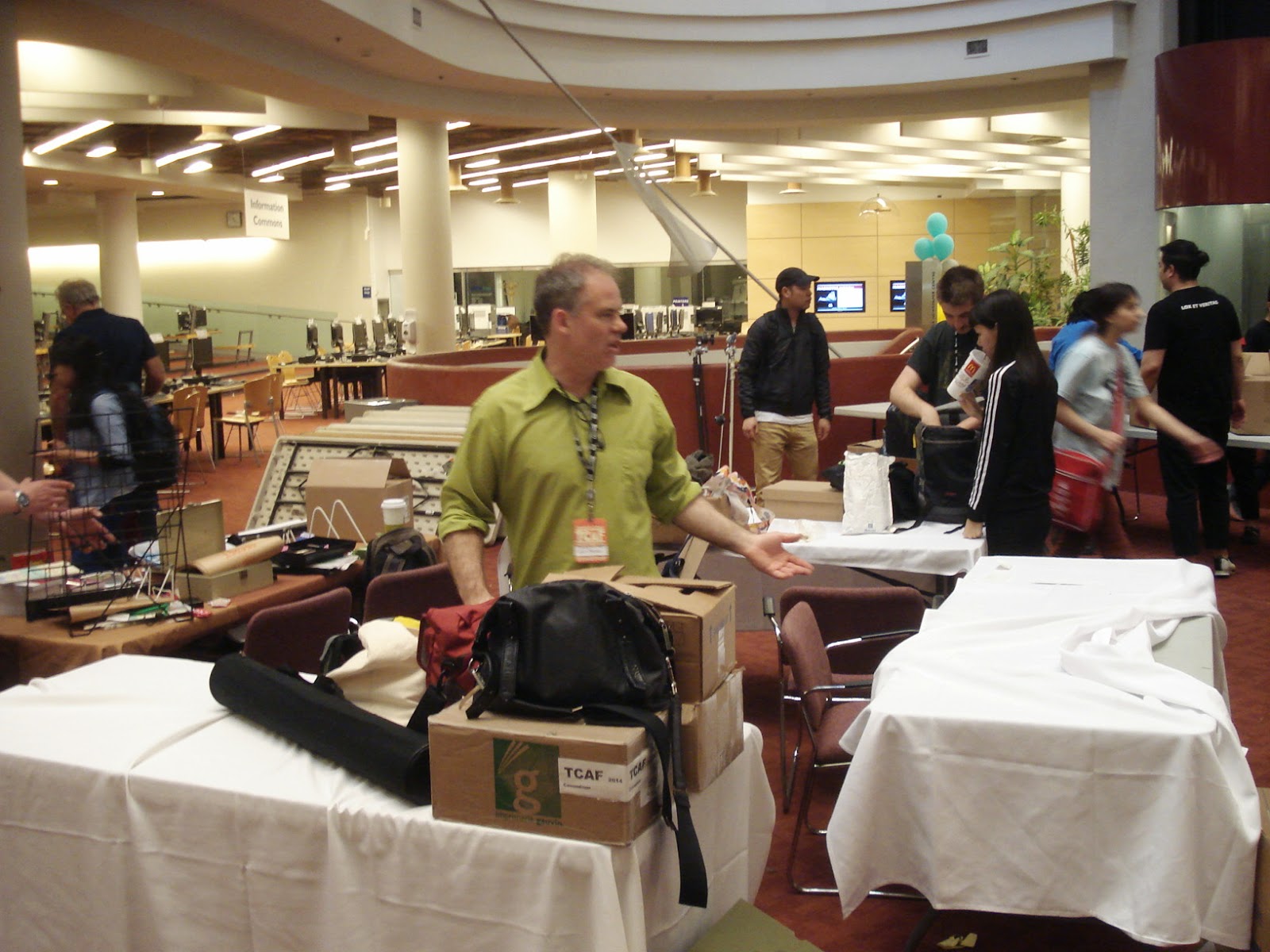 TCAF 2014, DONE. Thanks Peter Chris Andrew Gina all the volunteers, the Library. Everyone from America for not mentioning that Rob Ford shit at all. So many other people I saw and I love and didn't get pictures of. If you're not in here, it's because your picture was too blurry even for this post. I love you still.
This weekend was a really a time to Appreciate comics and comics creators and comics publishers and writers about comics and people who buy read and are excited about comics and I feel really inspired and grateful for you all. No joke to end it off, just being sincere. sniff. 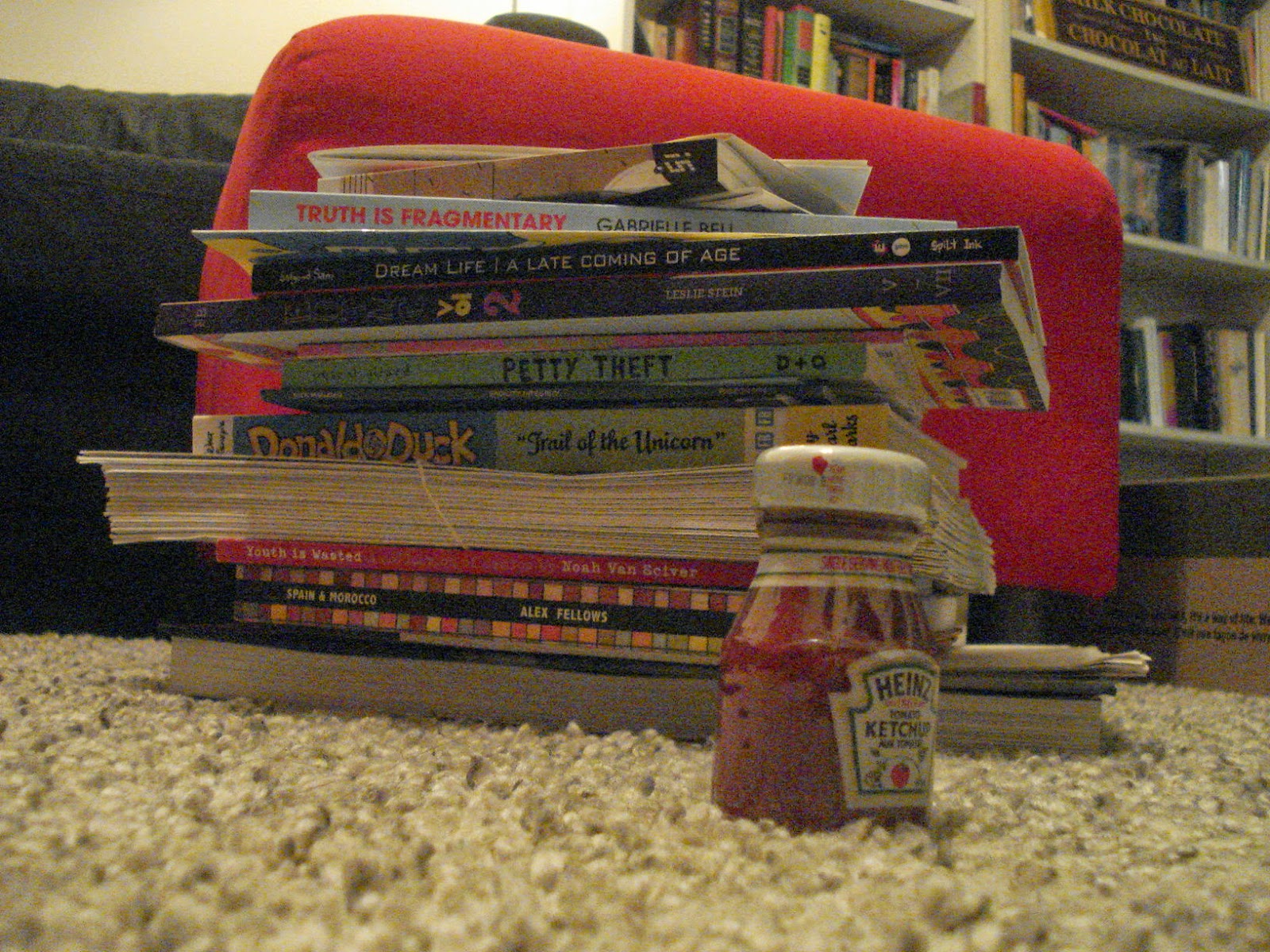 (here's my haul, with a full-size-ketchup bottle for stack-size scale.

you are one funny man, mister joe ! i did lol.

and now i know what it was like to be there !

Dayum. Your life is cool.